Get Used to the Frustration 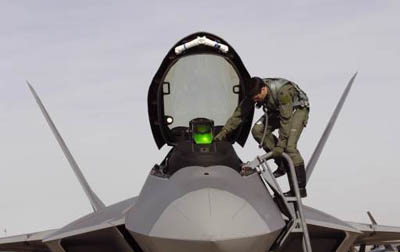 m the 64th and 65th Aggressor Squadron were frustrated flying against the F-22A Raptor in the aircraft’s first Red Flag exercise, held Feb. 3 to 16 at Nellis AFB, Nev., reports TSgt. Russell Wicke. Aggressor pilots attempted to use what they believed were modern threat tactics but were consistently thwarted by the new stealth fighter, just like the Raptor’s earlier romp at Northern Edge. Red Flag presented an even tougher test, though, because as Raptor pilot Lt. Col. Dirk Smith, 94th Fighter Squadron commander from Langley AFB, Va., explained the Red Flag aggressor forces represent the most lethal threat friendly forces would ever face. He called the F-22’s debut at Red Flag is a significant milestone.