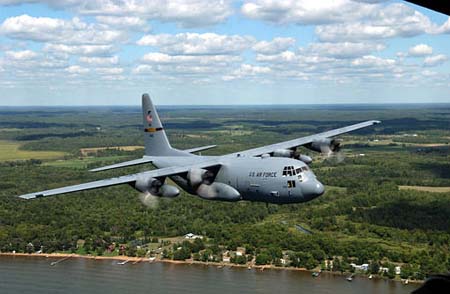 and Sen. Hillary Clinton have received word that the Air Force plans to move 12 C-130H2 aircraft to Niagara Falls ARS, N.Y., by July, “two years ahead of schedule,” the New York Democrats state in a joint release. Slaughter has been leading a charge to get USAF to commit to a solid plan for the facility by March 1. The New York Air National Guard’s 107th Air Refueling Wing, which loses its KC-135 tankers under BRAC 2005, will share the Hercules tactical airlifters with Air Force Reserve Command’s 914th Airlift Wing, which already flies C-130s. Both units operate out of the Niagara Falls station, and USAF announced last fall its plan to “associate” the two units, in a unique arrangement for two reserve components. However, the 914th had only eight Herks and they are H3 models. To make the teaming arrangement work, the two units needed at least 12 aircraft, so instead of mixing models—and causing training and operational problems—the service decided to move out the H3s and move in 12 H2s being given up by other units. On the New York plan, Slaughter said, “By receiving the new airplanes two years ahead of schedule, it not only makes certain that our service men and women have the necessary aircraft to succeed in their missions, but that the base will continue to add to Western New York’s economic growth and vitality.” She called the move “significant recognition by the Air Force as to the importance of Niagara Falls.”