The UAVs Have It 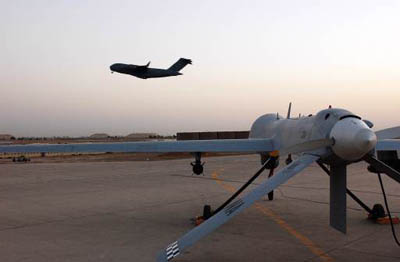 Gen. Tom Hobbins is sold on unmanned aerial vehicles, telling NATO representatives of the phenomenal growth in the number and capability of UAVs. He called the advance of UAVs into the information age “perfect timing,” turning unmanned systems into “a powerful force multiplier.” Speaking at the Multinational Joint Air Power Competence Center Oct. 18, the US Air Forces in Europe commander noted that more than 40 countries operate more than 80 types of UAVs. The US itself, he said, has 18 types and 3,000 vehicles. Hobbins said that six years ago, UAVs represented just four percent of aircraft dollars, but by 2010 they should account for 31 percent. Fueling this rapid expansion, said Hobbins, is the range of missions now slated for UAVs—from traditional reconnaissance and surveillance to 36 nontraditional applications, including strike.