Not Since the Vietnam War—Airmen on Ground Patrols 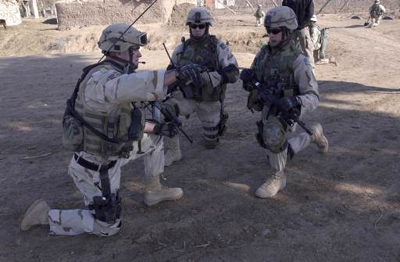 Air Force Security Forces are engaging in a type of mission not in the Air Force lexicon since the Vietnam War—conducting combat patrols and taking the fight to the enemy outside the confines of an Air Force facility. Slowly more details are emerging about the first such new mission—called Operation Desert Safeside—conducted by Task Force 1041, comprised mostly of airmen from the 820th Security Forces Group. The mission was to kill or capture insurgents that were attacking the air base. Over January and February 2005, Task Force 1041conducted more than 500 combat missions, captured 17 high value targets, eight major weapons caches, 98 other insurgents, and reduced enemy attacks in the area to almost nothing. Officials call it “an overwhelming success.” (Read our January article on “The Security Forces Rewrite.”)