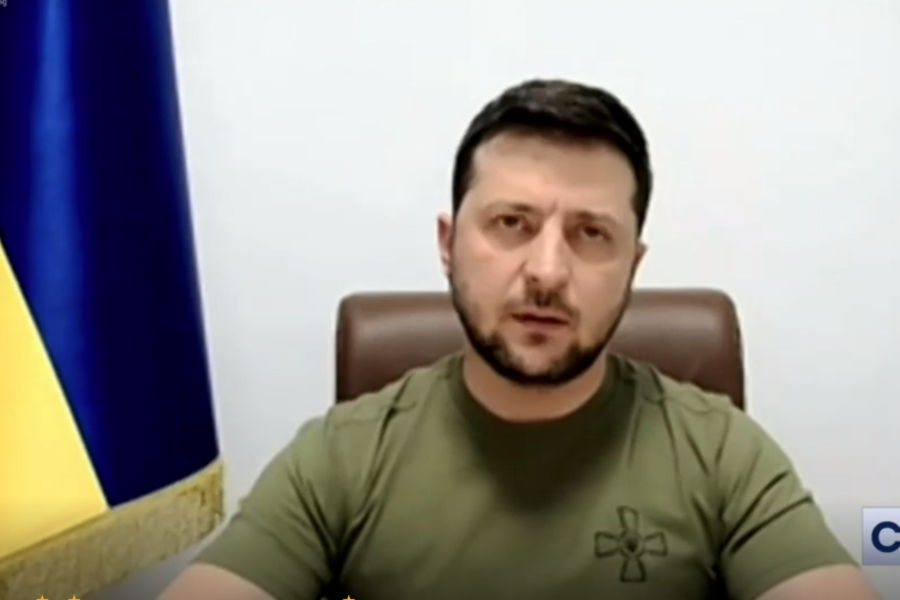 Zelensky Appeals for a No-Fly Zone, but Biden Pledges Only More Aid

Ukrainian president Volodymyr Zelensky made an emotional pitch directly to a joint session of Congress on March 16 to establish a no-fly zone over his beleaguered nation, but U.S. President Joe Biden, speaking a few hours later, declined to answer that request. Biden instead touted the more than $1 billion in aid for Ukraine appropriated in the past week and pledged a steady flow of other kinds of weapons and assistance for Ukrainians to fight their own fight.

Zelensky, appearing in a live video message, begged Biden to be “not only the leader of the free world” but also “the leader of peace,” and he asked for Russian-made S-300 air defense systems, new aircraft, and the no-fly zone.

“Is this too much to ask? … For a … humanitarian no-fly zone?” Zelensky said. “If it is, we offer an alternative. You know what kind of systems we need: S-300 and other similar systems.” He also asked for “aircraft that can help Ukraine … but they are on the ground, not in the Ukrainian sky.”

The U.S. does not have any Russian-made S-300 systems to offer, but Biden said that, at Zelensky’s request, “we have identified, and are helping Ukraine acquire, additional longer-range anti-aircraft systems and munitions for those systems.” Pentagon and diplomatic sources said discussions are taking place about transferring some S-300s from NATO countries that still have them, to be backfilled by American systems or other compensation.

Slovakia has S-300s and MiG-29s but won’t give them up until it has replacements in hand.

“This is the largest military operation ever for Slovakia,” said Javorcik, describing the logistical effort to provide lethal and non-lethal aid to Ukraine.

“We’re … emptying our own warehouses in Slovakia and providing the Ukrainians with air defense [and] land-based things which can they use,” he said.

To help backfill Slovakia’s air defenses, the Netherlands announced March 8 that it would deploy a Patriot air defense system there, but the system likely won’t be in place until April. Slovak pilots are training in the American F-16, but it won’t take delivery of those jets until next year.

Poland, which has done the most to facilitate weapons transfers to Ukraine, doesn’t have S-300s but does have Russian-made SA-8s and SA-12s.

Asked if Poland would be willing to send its Russian air defense systems across the border, a Polish defense official said, “If those Patriot Systems stay permanently, certainly our [ministry of defense] can consider doing more.”

“It is easy to give [the] ‘green light,’ but this is something we have to do jointly,” the official added. “Poland is not shying away from doing its part.”

Midway through his speech, Zelensky showed a video of still and moving images, first of Ukrainians in idyllic, pastoral, and family settings, suddenly offset by graphic images of missile attacks, dead bodies, burning homes, morgues, and refugees. He invoked Pearl Harbor and Sept. 11, 2001, saying that what America experienced on those days, Ukraine is experiencing every day.

The video was capped by the words, in English, “Close the sky over Ukraine.”

He also said that Ukraine is singularly shouldering a bloody fight for democracy and against autocracy and evil, and that all freedom-loving nations must come to its aid.

Zelensky offered profuse thanks for aid from America and other nations thus far but said that “it is not enough” and that his country can’t hold out indefinitely. He also demanded that new sanctions be introduced against Russia weekly; and that no Russian products should be allowed to enter American ports. His speech was greeted with three separate standing ovations from assembled lawmakers.

Biden praised the bravery of the Ukrainians and Zelensky personally, and promised the U.S would do all it could. America “is determined to make Putin pay a heavy price” for the invasion, he said. Economic sanctions on Russia will “only get more painful over time,” Biden said, noting that Russia’s economy is nearing collapse and that America is focused on “making sure Ukraine will never—never—be a victory for Putin.”

To that end, Biden said the U.S. has been providing weapons since last March and that the Ukrainians had them in hand when the invasion began. Over the past year, the U.S. has provided Kyiv with “hundreds of anti-air systems, thousands of anti-tank weapons, transport helicopters, high mobility vehicles, radar systems to track incoming artillery, and unmanned drones” as well as communications and satellite imagery analysis capability.

The U.S. has provided “9,000 anti-armor systems,” Biden said. “These are portable, high-accuracy, shoulder-mounted missiles that the Ukrainian forces have been using with great effect against invading tanks and armored vehicles.” Another 7,000 small arms have been provided—automatic rifles, shotguns, grenade launchers, and mortar rounds—as well as “20 million rounds in total” of ammunition.

Future assistance “will include drones, which demonstrates our commitment to sending our most cutting-edge systems to Ukraine for its defense,” Biden pledged. He did not name the unmanned systems to be sent. A White House fact sheet specified that “100 tactical unmanned aircraft” will be provided.

Ukraine does not have any American-made, remotely-piloted aircraft. Military experts later wondered if Biden meant he would send Ukraine more Turkish Bayraktar TB-2 drones, which the Ukrainians already have and have used productively, both in surveillance and target-designation mode.

Addressing himself to U.S. citizens, Biden said, “I want to be honest with you: This could be a long and difficult battle. But the American people will be steadfast in our support of the people of Ukraine in the face of Putin’s immoral, unethical attacks on the population. We are united in our abhorrence of Putin’s depraved onslaught.” He promised that the U.S. will “continue to have their backs” as Ukrainians fight to preserve their nation and freedom. He also pledged another $300 million in humanitarian assistance for the three million Ukrainian refugees now in other NATO countries; and thanked the allies and partners for both taking in the refugees and for “facilitating” the supply of materiel to Ukraine.

Lawmakers came away from Zelensky’s speech impressed and anxious to help.

“We must keep them in the fight,” said Rep. Ann Wagner (R-Mo.). Providing MiG-29s “that they have been requesting for some time is no different” than the aid and weaponry the U.S. has already provided, she said. “We must work with Poland to make that happen.”

Rep. Albio Spires (D-N.J.) said he’s “frustrated” and doesn’t understand “why people are so afraid to go against” Putin. Zelensky is “the only guy that’s giving Putin a black eye.” Given Russia’s annexation of Crimea, land grabs in Georgia, and intervention in Syria, “we need to support Zelensky as much as we can to punch [Putin] out and realize he can’t do this to the people of the world.” Sires said he’d support “any kind of effort” to support Ukraine.

The Foreign Affairs Committee “will be looking at … authorization of use of military force” in Europe, said Rep. Bill Keating (D-Mass.).

“I call on President Biden to stop staring at the problem and provide the capabilities President Zelensky specifically asked for,” Rogers said. These include air defenses like the S-300s and unmanned aerial systems, such as multiple variants of the Switchblade UAS. I want to see the Biden administration get Ukraine these weapon systems immediately.”