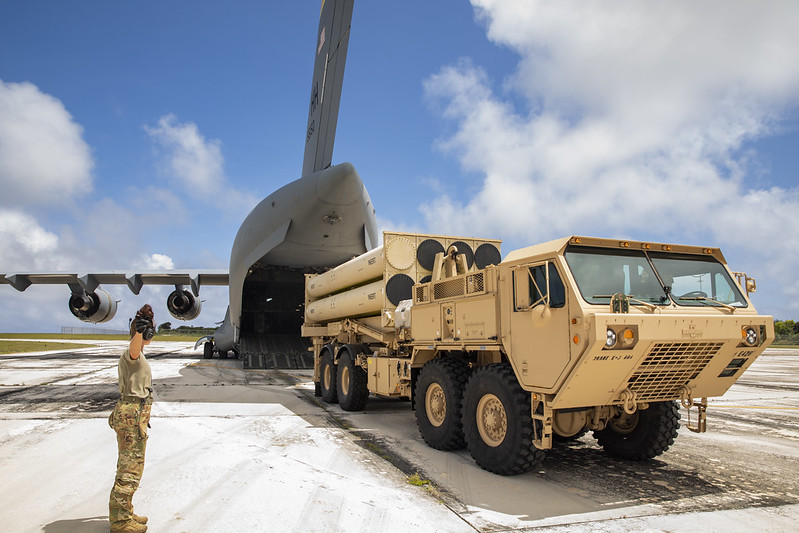 Guam is just a speck in the vast Pacific Ocean, 30 miles long by 12 miles at its widest point, but its location in Micronesia in the South Pacific makes Andersen Air Force Base a crucial hub for fighter and bomber aircraft. The Army’s base defense mission is, therefore, paramount to protecting it as a forward position for re-arming and repairing strike aircraft.

Joint Region Marianas commander Navy Rear Adm. Benjamin Nicholson said “the potential for a Guam defense system” is now the big news on the island. Such a defense would answer the call by commander of U.S. Indo-Pacific Command Adm. John C. Aquilino for 360-degree radar and missile defenses to protect the island from ballistic, cruise, and hypersonic missile threats.

Today, the base depends on the Army’s Terminal High Altitude Area Defense system, which has been in Guam since 2014, when it was deployed in response to North Korean threats.

The THAAD battery “gives us protection from ballistic missiles, and some of the other missiles as well, but it is somewhat limited in scope,” Nicholson said. “The new system will provide a more comprehensive ability to defend the island from all threat axes and a larger group of missiles. That’s in the works. There’s still a lot of work to be done on where those parts and pieces will go.”

Guam is shaped like a tilted hourglass with high plateaus in the north and a mountain range in the south. The Department of Defense controls 27 percent of the island, but most of that property is in the flatter northern plateau, including Andersen and Marine Corps Camp Blaz. It has very little land in the mountainous south or east of Naval Base Guam.

U.S. national defense competes as a priority with tourism and environmental concerns. That means missile systems will most likely “have to be in multiple different locations throughout the island to provide the proper radar coverage, the proper interceptor coverage,” Nicholson said.

U.S. Army Maj. Kyle J. Hermanson, Task Force Talon commander here, said “THAAD is the most capable surface-to-air missile system the Army has ever fielded” against theater ballistic missile threats. “Unlike Patriot … THAAD defends a large area and not just a specific asset, such as an airfield. THAAD is the cornerstone for the defense of Guam mission.”

“The Army … is always incorporating and fielding new capabilities in order to create additional problems for our adversaries,” Hermanson said.

In March, a THAAD unit deployed to Rota, a nearby island, to test remote launch capability. Hermanson said the test proved the Army could use the system to better protect Air Force units during agile combat employment events, in which small numbers of aircraft operate from dispersed and often austere locations, such as small Pacific islands, rather than large concentrated bases.

Still, PACAF commander Wilsbach said the Army needs to “step up” development of missile defenses. “When you start getting out to some of these island locations … nations, they obviously don’t have defenses,” he said in an interview at PACAF’s headquarters at Joint Base Pearl Harbor-Hickam, Hawaii. Defending U.S. bases “is a U.S. Army mission set.”

Wilsbach said allies play an important role in base defense in Japan and Korea, along with the Army’s THAAD and Patriot missile systems. Similarly, the Navy shares in the defense of Guam with Aegis-equipped ships. The Air Force is responsible for defending against air threats, including cruise missiles.

“I’m really counting on the Army to step up and advance their capabilities to get after some of the newer threats we’re seeing,” such as hypersonic and maneuvering reentry vehicles and new stealthy cruise missiles, Wilsbach said. “These are all tough targets to hit.”

“They are working on it,” he said. “I can’t get it soon enough. So, I need them to push it up—hurry up and field those capabilities for them and for us.”