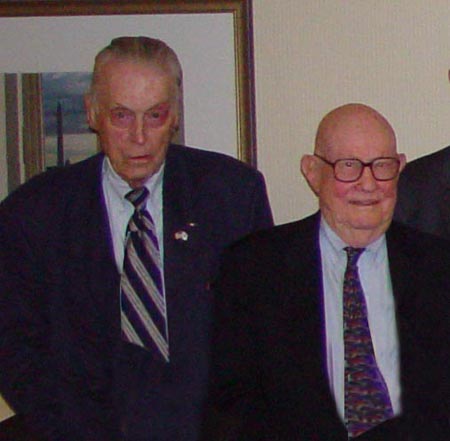 Retired Brig. Gen. William W. Spruance (at left in photo with Johnny Alison), long-time airpower proponent, Air National Guard champion, and flying safety advocate, died in his home in Las Vegas on Jan. 15. He was 94. “We owe profound thanks to Bill for his insight, wisdom, and never-ending dedication,” said Air Force Association President and CEO Mike Dunn. Spruance was a long-time board member of AFA and the Aerospace Education Foundation, now a part of AFA. A native of Wilmington, Del., Spruance received an Army commission in 1939. During World War II, he pioneered the use of light airplanes in the forward air control role in Europe and flew hundreds of transport missions in the China-Burma-India theater. He was a founding member of the Delaware Air National Guard following the war. In 1961, he received extensive burns in a near-fatal T-33 crash. Shaped by that experience, he went on to give more than 1,500 presentations on flight safety and crash survival to more than 150,000 persons, some of whom credited Spruance with saving their lives. He retired from the Air Guard in 1976. At the time of his death, Spruance was an AFA national director emeritus and chairman emeritus of Embry-Riddle Aeronautical University, having been chairman of the latter for 17 years. (Spruance biography)