Whirlybirds of a Feather 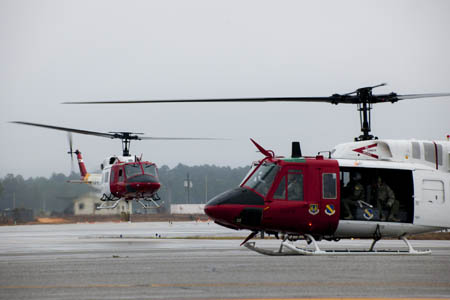 Air Force is consolidating all rotary-wing developmental testing and evaluation at Duke Field, a part of Eglin AFB, Fla., in an effort to tackle four upcoming helicopter programs. Shifting UH-1Ns from Eglin’s main ramp to Duke, some eight miles north, will allow testers to “support two-and-a-half times as many programs with virtually the same size work force,” said Col. Colin Miller, Eglin’s 46th Test Wing commander. The 40th Flight Test Squadron helos will integrate with the 413th Flight Test Squadron—also in charge of MC/HC-130 programs—operating from facilities originally intended for the canceled CSAR-X helicopter program. Beginning in June, testers at Duke will begin test and evaluation activities supporting TH-1H and UH-1N Huey modernization and HH-60G operational loss replacement. They will also support the future acquisition of a new combat rescue helicopter. “In the current budget environment, we have to find smarter ways to test with our limited resources,” said Capt. Garrett Knowlan who is orchestrating the shift. (Duke release)