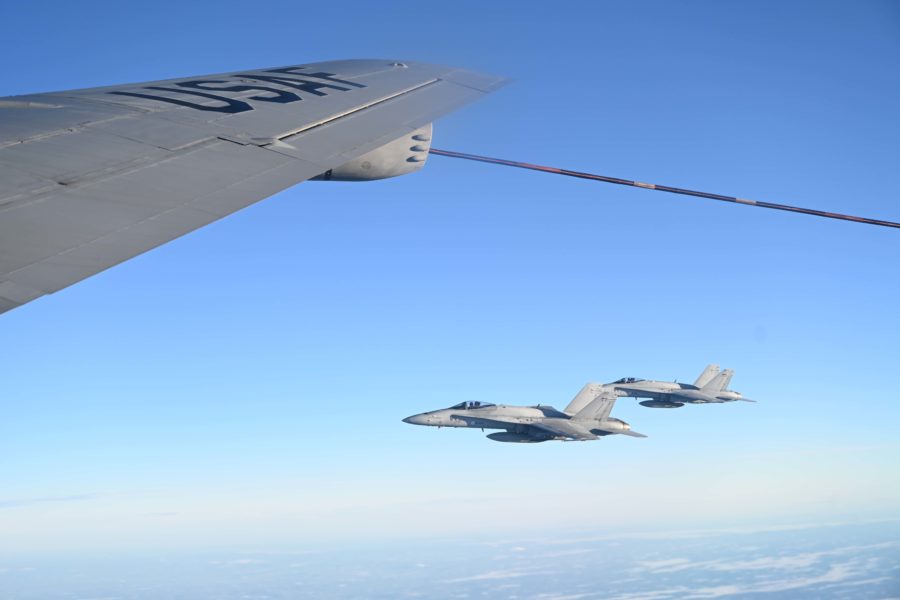 Finnish fighter pilots take off, land, and fly in harsh Arctic conditions routinely—all within range of Russian air defenses. They often share these specialized capabilities with the U.S. Air Force to hone Arctic agile combat employment (ACE) concepts. But as the Nordic nation contemplates a NATO bid, Finland worries it could be left in the cold if Russia attacks before a potential Article 5 protection is triggered.

“We have to be ready to defend ourselves against Russia,” a Finnish defense official said at an April 26 background briefing at Ramstein Air Base, Germany, where more than 40 nations gathered to discuss how to better support Ukraine’s war effort against Russia.

“There [aren’t] any ‘in the meanwhile’ security guarantees,” the official added, speaking to journalists on the condition of anonymity.

Finnish defense officials told Air Force Magazine that Finland’s joining NATO would lead to a deeper U.S. Arctic cooperation and Air Force integration, a necessity in a world where Arctic air power is rising in importance.

The official cited Finland’s decision to purchase the F-35 as a central piece in a strengthening partnership between the air forces of the United States and Finland.

“You could say the F-35 is a Nordic fighter, and it has a big meaning for the future,” the official said, referring to the selection of the Joint Strike Fighter by Norway, Denmark, and Sweden.

The official said Finland’s “suspicions” about Russia were affirmed when Russia invaded Ukraine, raising popular support for joining NATO to nearly 70 percent, its highest ever. The official said the Finnish parliament was reviewing defense material provided in April and that parties were formulating their positions. But Russia could still thwart a NATO bid with an attack.

Sharing a 900-mile border with Russia and with close proximity to Russian air and naval assets near St. Petersburg, Finland for decades has been developing the means to defend itself, creating an Arctic expertise that can benefit the United States.

“We know the Arctic. We know our neighbors. So, we have a lot of understanding competencies concerning these areas that would be an easy benefit for the U.S. armed forces to cooperate with us,” Finland air and defense attaché Col. Petteri Seppala told Air Force Magazine in an interview at the Embassy of Finland in Washington, D.C.

Finnish combat pilots must hone skills to operate in harsh winter conditions as a basic operational necessity, including taking off in snowstorms, flying in clouds, and landing on icy runways. In recent years, the Defense Department and most of the military services have received new Arctic strategies. That shift in focus is bringing the U.S. Air Force and a small, yet capable, Finnish Air Force closer together, the Finnish air attaché to the United States told Air Force Magazine.

“The cold climate and high technology, they are not a good combination every time,” the attaché said. “There are ways to do it. It’s not as easy as if you are flying in the California sun all the time.”

The challenge of flying in winter Arctic conditions is one that Finnish pilots know well. Because of Finland’s aviator preparation, its air force is able to use one-third of the maintainers required by the U.S. Air Force, Seppala said.

As the Russian threat rises, and Arctic warfighting skills become more urgent, the Finnish Air Force has experience and tactics it shares with the U.S. Air Force in exchange for help to fill its own capability gaps.

The U.S. Air Force’s new ACE concept, which relies on multi-capable Airmen who can quickly get to and operate in austere locations, “has been the basic ideology of operating the Finnish Air Force,” Seppala said, describing Finland’s own version of ACE, which is complicated by Finland’s geographic proximity to Russian anti-access/area denial (A2/AD) weapons. In fact, almost all of Finland’s air bases are inside the A2/AD bubble created by Russia.

U.S. Air Forces in Europe (USAFE), headquartered at Ramstein, coordinates cooperation with Finland and has seen a host of benefits in recent years.

“Finland’s air forces have a great deal of knowledge and innovation they share with the U.S. Air Force about dispersal operations and other concepts related to agile combat employment,” a USAFE spokesperson told Air Force Magazine, noting that Finnish defense and air attachés in Washington also have delivered briefings to U.S. Air Force staff.

Finland is a “key contributor” to the Arctic Challenge exercise series and to trilateral training aimed at enhancing interoperability with the U.S. and Swedish Air Force. Finland’s biennial premier Arctic exercise is its own version of Red Flag with partners Norway and Sweden, and the participation of Denmark and USAFE, scheduled to be held again in 2023.

Finland’s northernmost Lapland region of mires and forests is similar to parts of Canada and Alaska with vast air spaces for maneuvering but a challenging environment with extreme climates.

Finland’s Air Force has been flying since 1918. A small but “really efficient” service of 2,000 airmen operate 62 F/A-18s, command-and-control aircraft, and air transport over a vast and sparsely inhabited territory that reaches into the Arctic and along the border with Russia, explained Seppala. Finland plans to upgrade its Air Force with 64 F-35s by 2028. Aircraft will begin arriving in 2025 with full operational capability expected by 2031.

“The Finnish Defence Forces, and if we talk about the air forces, especially, they are even more interoperable with NATO than some of the member air forces are,” Seppala said.

Finland’s adoption of the F-35 is believed by both sides to be an avenue to deepen opportunities for interoperability, joint training, and refinement of Arctic skills.

“We gain a great deal of insight every time we get the chance to train with Finland,” the USAFE spokesperson said. “Given the importance of the Finnish Air Force in U.S. Air Force efforts to grow our knowledge and experience in Arctic operations, we expect plenty of opportunities for combined exercises between Finnish and U.S. F-35 aircraft.”

Once Finland phases in its F-35 fleet, Seppala expects a host of integrated exercises, to include virtual exercises and flying with Alaskan F–35s. This will complement existing exercises in which Finnish F/A-18s practice refueling with USAF KC-135s.

The Nordic country is particularly worried that Russia could attack its territory as a way of preventing the 30 NATO members from agreeing to admit Finland.

While observing defense exercises in Finland on May 4, British Defense Minister Ben Wallace said the United Kingdom would help defend Finland if it were attacked by Russia while awaiting NATO membership. Wallace made a similar guarantee in April to Sweden, which is expected to jointly submit an application to join NATO alongside Finland.

The United States has not publicly made such a guarantee, but the Defense Department said it would “find ways” to come to Finland’s aid.

“Both Finland and Sweden are close and valued defense partners of the United States and of NATO,” DOD spokesperson Marine Corps Lt. Col. Anton T. Semelroth told Air Force Magazine in a statement.

“Our militaries have worked together for many years,” he added. “We are confident that we could find ways to address any concerns either country may have about the period of time between a NATO membership application and their potential accession to the Alliance.”

Even defense assistance comes with limitations, as Ukraine is learning. Russia is already using hybrid warfare techniques against Finland, including cyber, information, and other measures, Seppala said.