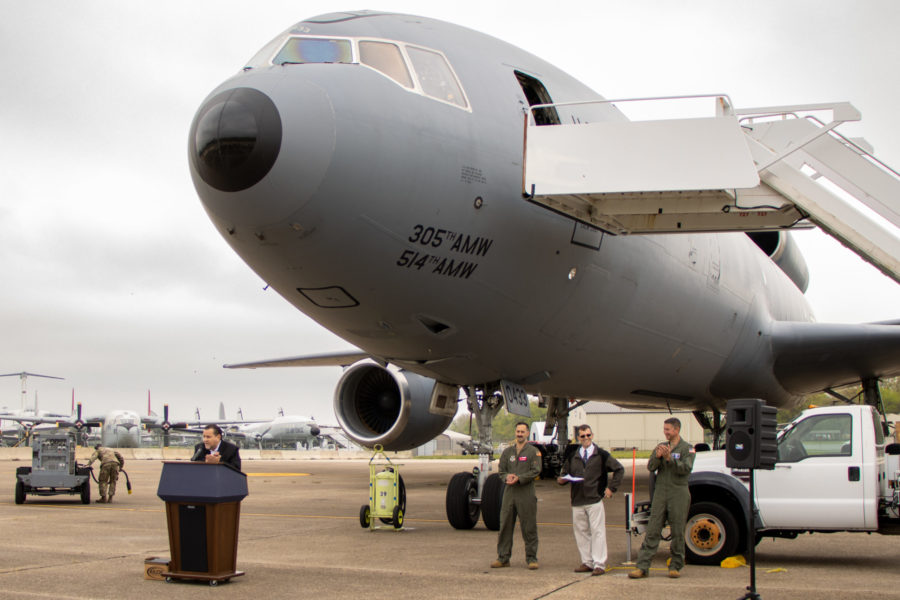 His Grandfather Helped Fly the Very First KC-10. He Was on Its Last Flight.

On April 26, the first KC-10 produced for the Air Force, tail number 79-0433, touched down at Dover Air Force Base, Del., for its final flight before being transferred to the Air Mobility Command Museum.

For one of the men on board the tanker, that flight marked a full circle spanning three generations.

Master Sgt. Paul Stoshak was eight years old when he visited his grandfather, Leo Hazell, in Yuma, Ariz., and went out to the flight line at the facility for McDonnell Douglas, where Hazell worked.

For Hazell, the KC-10 meant a great deal. As a test flight engineer, he was deeply involved in McDonnell Douglas’ development of the KC-10 and actually flew on that first tanker when it made its first flight. As Stoshak remembers it, going to see that KC-10 in Yuma meant getting “to meet his airplane that he got to spend so much time with.”

Experiences like that were what hooked Stoshak on aviation.

“In addition to him working as a test flight engineer for McDonnell Douglas, he also had an airplane mechanic business on the side,” Stoshak said. “So he pretty much got me started as young as I can remember. I remember being 10 years old, rebuilding a Cessna 150 engine on my grandmother’s dining room table. It just got me hooked. I absolutely loved the mechanics of it, just learning how everything went together and how everything worked in conjunction to get everything flying. And then he also had a Mooney 231, and he used to take me flying on that.”

The family had a history of military service. Hazell served in the Marine Corps, and one of his sons, Stoshak’s uncle, joined the Navy. So when Stoshak decided to combine those two passions, the choice was obvious.

“Just kind of putting two and two together—military and [aviation], and the Air Force, in my personal experience, has some of the coolest toys as far as aviation goes. So that is definitely why I wanted to go that direction,” Stoshak said.

In August 2001, Stoshak enlisted and pursued a career as a maintainer. For six years, he worked on B-1 bombers at Dyess Air Force Base, Texas, and was eventually assigned his own aircraft as part of the Dedicated Crew Chief program. From there, he shifted gears, becoming a recruiter and moving to Los Angeles.

Finally, in 2010, Stoshak had the opportunity to move across the country to Joint Base McGuire-Dix-Lakehurst, N.J., some 30 miles from his hometown of Marlton, N.J. At McGuire, he reunited with the KC-10.

It didn’t take long for him to identify tail number 79-0433 and its significance to his family, thanks to another uncle who works as an airline pilot and has a passion for family history.

“I always knew the 433 was a special airplane. That was the first one built. It was the one that he spent so much time test flying,” Stoshak said. “And even when I was a production superintendent working on the flight line, every time I stepped on 433, I kind of got to think about my grandfather and all the time we spent together, all the time he spent on this airplane, making sure they gave us the best, safest product they possibly could. So the connection has always been there.”

Hazell was actually able to visit Stoshak at McGuire and “see the airplane as it is now, kind of more modernized from when he flew it,” Stoshak added.

In April 2011, Hazell died. Over time, Stoshak transitioned away from his production superintendent job into a flight safety role.

But when the time came for the 79-0433 to be retired and permanently preserved at the AMC Museum in Dover, he had the opportunity for one final flight, taking the plane his grandfather helped to develop to its final destination.

“It was absolutely surreal,” Stoshak said of that last trip from McGuire to Dover. “I was thinking about him the whole flight down there. Just memories rushing back and being a kid in the airplane. And then not only that, but just all the great times that I’ve had on the KC-10, just flying around all over the world. I’ve done three deployments with the KC-10, all to Southwest Asia, just all the good we did over there. [I’m] just really happy that the airplanes are able to be preserved.”

As part of the ceremony and festivities surrounding the retirement, Stoshak and the rest of the crew got to recreate a family picture of Hazell and his crew posing in front of the KC-10, some 40 years later.

Now, as the Air Force prepares to retire its KC-10 fleet over the next several years, Stoshak has the opportunity to reflect on its impact—for his own family, but also for the broader force.

“I’m just really happy that this aircraft is able to be preserved,” Stoshak said. “And it’s not just for me … it’s for the whole KC-10 community. This aircraft served so well for 40 years. It did absolutely everything it was called on to do. It served in basically every single U.S. operation since right before the [first] Gulf War. It’s had a piece in absolutely everything. It’s really helped secure global power for America. Everywhere it’s been called to do it, it’s done it exceptionally. I’m just really happy to have been part of that.”

The KC-10 is scheduled to be on static display during the 2022 Thunder Over Dover airshow May 21 and 22 and will eventually be parked at the AMC Museum, according to an Air Force release.