Vertical Landing in the Bag 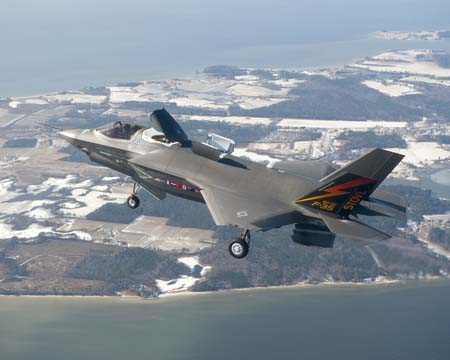 The day after proving the F-35B short takeoff/vertical landing test aircraft could hover successfully, F-35 lead STOVL pilot Graham Tomlinson took BF-1 through its first vertical landing demonstration on March 18 at NAS Patuxent River, Md. In a Lockheed Martin release, Tomlinson said, “Today’s vertical landing onto a 95-foot square pad showed that we have the thrust and the control to maneuver accurately both in free air and in the descent through ground effect.” He conducted an 80-knot short takeoff and 13 minutes later positioned the test aircraft 150 feet above the airfield, hovering for one minute before descending to the runway. Tomlinson, a retired RAF pilot who works for BAE Systems, praised the low cockpit workload of the F-35B, saying it “contrasted sharply with legacy” STOVL platforms. Robert Stevens, Lockheed’s chairman and CEO, called the test a “vivid demonstration of innovative technology.”