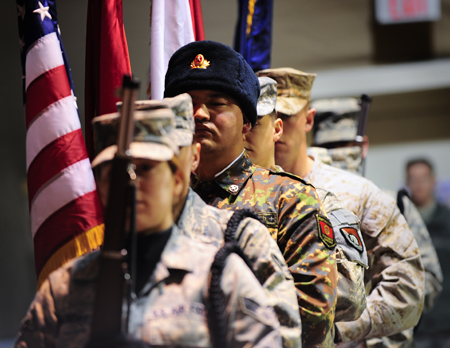 and Kyrgyz officials joined airmen of the 376th Air Expeditionary Wing at the Transit Center at Manas in northern Kyrgyzstan to commemorate the 10 years of US-Kyrgyz cooperation there. Manas is an important US-run air mobility hub that has supported coalition operations in Afghanistan since the early days of Operation Enduring Freedom in late 2001. A joint US-Kyrgyz color guard performed at the Dec. 21 ceremony, as did Kyrgyz folk singers. “I’m honored to celebrate the continued partnership between the US and the Kyrgyz Republic,” said Lt. Gen. Goldfein, Air Forces Central commander, during the gathering. He added, “This is a special day on which we commemorate our many achievements and look forward to our future of cooperation.” Retired Lt. Gen. Christopher Kelly, who led the 376th AEW in its early days at Manas, said the wing “has played a huge role” in the enduring US-Kyrgyz partnership. (Manas report by SrA. Lynsie Nichols)