USAF’s Flying Mishap Rate Is Down 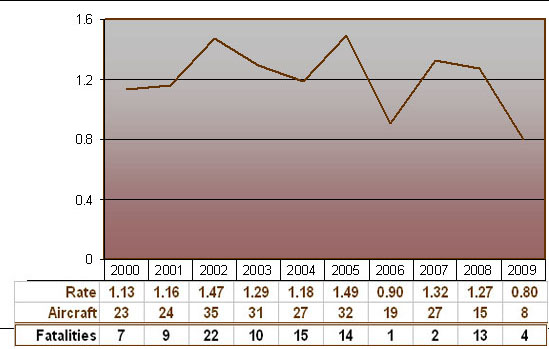 The Air Force flying safety statistics for Fiscal 2009 showed a marked reduction in the number of Class A mishaps, with the service reporting its lowest rate over the past 10 years. According to the latest data from the Air Force Safety Center, the overall Class A rate (mishaps per 100,000 flying hours) for Fiscal 2009 was 0.80, down from the previous year’s 1.27 rate and the lowest rate recorded over the past 10 years. The total number of Class A accidents for 2009 was 17, with eight aircraft destroyed. (Class A accidents are those that result in fatality or total permanent disability, loss of an aircraft, or property damage of $1 million or more.) The center reported four aviation-related fatalities, compared to 13 in 2008.