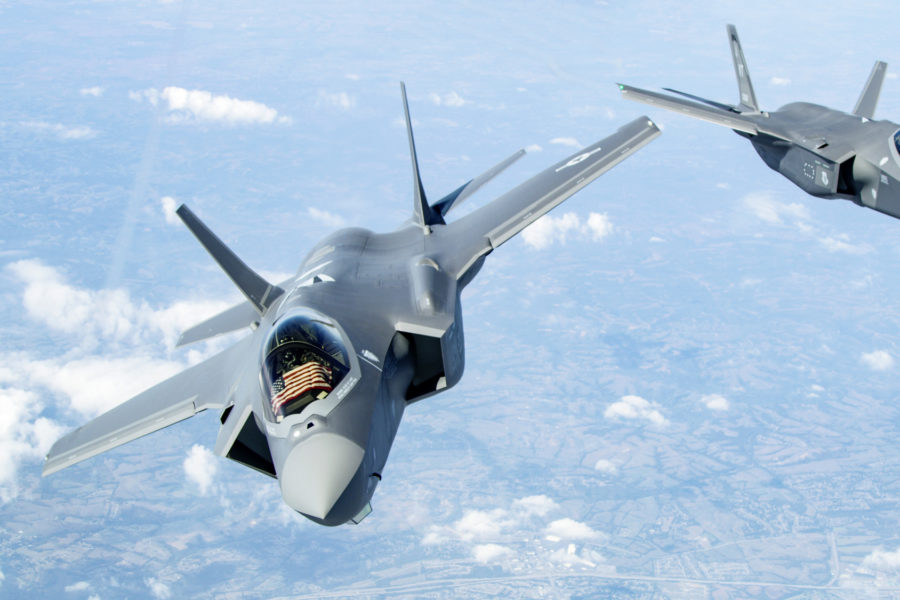 The Air Force will propose about a 10 percent cut in its planned F-35 purchases in the upcoming future years defense plan, citing sustainment costs for the jet well above what was expectd, and because the service prefers to wait for the more advanced Block 4 model. Budget talking points obtained by Air Force Magazine appear to show the USAF giving the F-35 program an ultimatum: Get costs under control over the next six to eight years or the overall buy will be sharply reduced.

According to the talking points, which were prepared for Chief of Staff Gen. Charles Q. Brown. Jr., the Air Force plans to request 48 F-35s in fiscal year 2022, but only 43 aircraft a year from fiscal 2023 to 2026. The effect over the five years would be to buy 220 jets versus 240 under the previous plan.

Whether Brown has signed off on the new plan is unclear.  “The information outlined in the talking points regarding future Air Force fighter force structure is pre-decisional,” said Brig. Gen. Patrick Ryder, the Air Force public affairs chief, who declined further comment about pending budget or resourcing decisions.

In the last three budget years, the Air Force requested 48 F-35s and Congress added another 12. That 25 percent increase on USAF’s depot and spares capacity has hurt mission capable rates and prompted some members of Congress to declare they will fight any further such “plus-ups,” to let the sustainment enterprise catch up.

The Air Force set an operating cost goal of $4.1 million per airplane per year—in fiscal 2012 dollars—early in the program, expecting the cost would be in line with that of the F-16. It has failed to hit those marks, however, and Air Force leaders have recently expressed hard skepticism that the goal can ever be achieved. Air Combat Command boss Gen. Mark D. Kelly said in February he was not “brimming with confidence” about reaching F-35 support cost goals, and he reiterated that sentiment after a late March tour of F-35 sustainment facilities.

In fact, according to the USAF talking points, the service expects sustainment cost per tail per year to be $7.8 million in 2036 (again, in 2012 base year dollars).

“This is an unaffordable sustainability model, if the F-35 were to become the majority of [the Air Force’s] fighter fleet,” the document said. “The Air Force needs the F-35’s advanced capabilities, [but] in affordable capacity.”

The service expects to retain the F-16 into the 2030s and needs to backfill it with something to perform “missions short of high-end warfare,” the document said. If the F-35’s operating and support costs could be “brought significantly lower,” the USAF would prefer to buy it for this mission, reducing the number of logistics tails and expanding operational flexibility. “Otherwise, the Air Force will have to look for an alternative platform,” according to the talking points. It added that this “decision point is at least six to eight years away.”

The service further noted that the Marine Corps and Navy—which have more complex versions of the F-35—set a cost per tail per year of $6.8 million and $7.5 million, respectively, “which are more realistic but likely still unachievable.”

The Air Force noted that the F-35’s procurement price has come down steadily over the last decade, now below $80 million a copy, but that sustainment “will be the overall cost driver.”

Air Force Lt. Gen. Eric T. Fick, program executive officer for the F-35 Joint Program Office, acknowledged the numbers in the McAleese and Associates defense conference May 13. “I see cost as the program’s greatest enemy. I see high cost as an existential threat to the F-35,” he said.

Sustainment is “where we really have the biggest mandate and the biggest challenge,” Fick said.

He also put the sustainment metrics in context, noting that numbers can be confusing.

“Alternatively,” he continued, “I can fly less—maybe offload some of that work to simulators, … and that would increase the cost per flying hour, because I’m now amortizing all my fixed cost to a lower number of flight hours.” Only by looking at both numbers together, he said, “can you get a really clear view of the work that you’re doing.”

Fick said the JPO is “laser focused” on reducing sustainment costs by standing up more organic depot support, building better quality into parts so they spend more time on the aircraft and require less repair, and looking to economize on the Lockheed Martin and Pratt & Whitney “polo-wearing folks” who are “doing great work, but they’re very expensive.”

Those areas are “what we’re targeting” for cost improvement, he said, and are “at the heart” of discussions about a potential long-term Performance-Based Logistics contract with Lockheed that may get started with a request for proposals this summer.

Also ongoing are negotiations for the Lot 15-17 contract with Lockheed Martin, Fick said. He called the Lot 14-16 agreement an “awesome deal for the taxpayer” and said he is expecting a contract on the next lot by the end of this fiscal year.

The Air Force talking points continue to describe the F-35 as the “cornerstone of the high-end fight.”  It was originally supposed to replace all the F-16s and the A-10s, but “whether the Air Force is able to afford to replace the majority of the fighter fleet with F-35s is a decision point that is still a few years off. In the near term, we must concentrate on achieving the F-35 capability needed for advanced threats (high-end fight).”

For the near future, and through the decade, the talking points say the Air Force will concentrate on “prioritizing” the Block 4 fleet and building it “to desired capacity; finaliz[ing] basing laydown; [and] continu[ing] advanced weapon integration.” Block 4 “must be affordably realized,” the Air Force said.

Fick said that the Block 4 improvements, previously planned to come at a rate of two per year, will now be annual only, due to the complexity of software integration.

The service will also explore manned/unmanned teaming arrangements between the F-35 and autonomous escort aircraft.

“While the F-35 is a formidable platform today, it has some significant challenges to ensure it stays capable against an evolving future threat,” the Air Force document said. Operating costs and sustainment “are areas of concern that need continued focus and work to address affordability.”