Skip to content
Civilians from the 437th Aerial Port Squadron position a Negatively Pressurized Conex prototype after its delivery to Joint Base Charleston, S.C., on April 21, 2020. The NPC was rapidly developed and designed to fit inside both C-5 and C-17 aircraft to enable safe transport of up to 28 patients, as well as teams of medical professionals to medical facilities around the globe. Air Force photo by Staff Sgt. Chris Drzazgowski.
Expand Photo 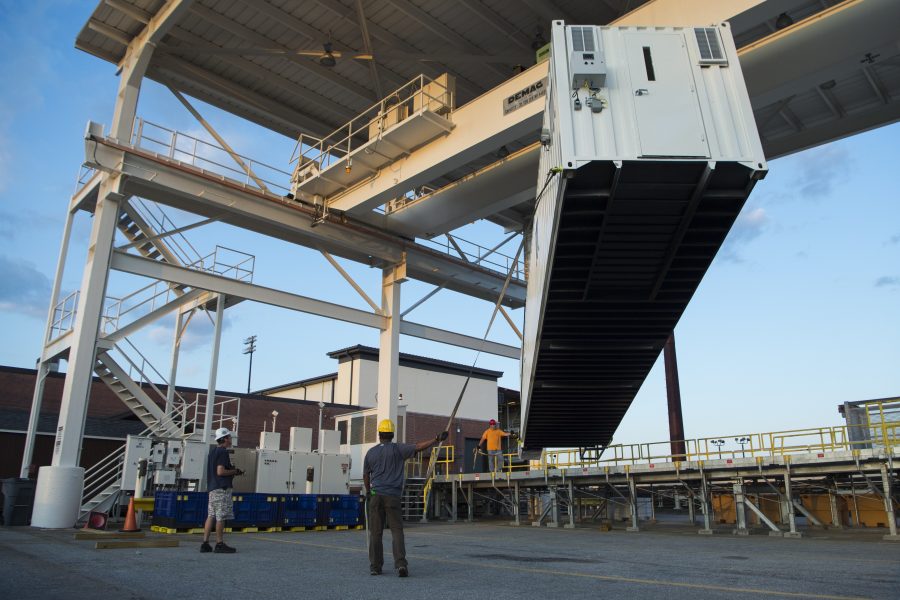 A joint Air Force team on April 21 delivered a rapidly developed containment system prototype that will enable as many as 28 COVID-positive patients to be transported aboard a C-17.

The team, led by the Air Force Life Cycle Management Center and the Air Force’s Chemical, Biological, Radiological, and Nuclear Defense Systems Branch, responded to a U.S. Transportation Command Joint Urgent Operational Need request for a transport to carry dozens of patients within weeks. The Negatively Pressurized Conex system cost about $2 million to develop and was delivered to Joint Base Charleston, S.C., for testing and possible fielding by the end of next month.

“The goal of the NPC is to help us keep infectious organisms contained in order to prevent the aircrew and medical professionals onboard the aircraft from being exposed,” Capt. Alexis Todaro, the NPC’s program manager, said in a release. “The container is negatively pressurized; fans are continuously pulling the air from within the unit through high-efficiency particulate filters to prevent any exposure to the aircraft.”

The specialized container has an “anteroom,” in which medical professionals can put on personal protective equipment before entering the main chamber for patient care.

In response to the urgency of the request, the Air Force team awarded and received a prototype box in 13 days, as opposed to a regular contracting award process of about four months, according to AFLCMC. A combined industry team from UTS Systems, Highland Engineering Inc., and Delta Flight Products produced the system.

“We acquired one system, and will put it through a series of tests to make sure it contains bio organisms, meets the needs of the aeromedical evacuation teams, and that it’s safe to fly on the C-17,” Capt. Kerollous Marzouk, the program’s test lead, said in the release. “After we can provide those three things, we will provide this information to leadership for a procurement decision.”

The Air Force is already transporting infectious patients using the Transport Isolation System, which stems from the 2014 Ebola outbreak. That system, however, can only carry up to four patients each. Air Mobility Command is also evaluating the airflow within its aircraft to determine how to safely transport infectious patients.