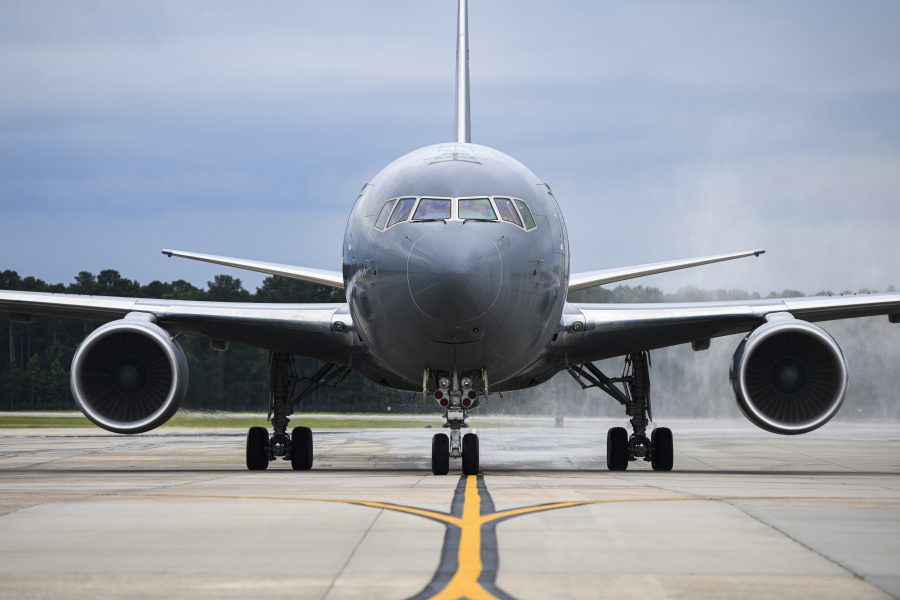 USAF Reaches Out to Industry for ‘Bridge Tanker’

The Air Force is seeking options for a “bridge tanker” to fill the gap in tanker capacity anticipated between the end of KC-46 Pegasus production and development of a future refueler.

USAF’s Life Cycle Management Center on June 16 issued a Sources Sought Announcement seeking qualified, interested companies to provide a commercial derivative aircraft “based on existing and emerging” technologies. While specific requirements are not fully defined, the Air Force said the tanker can be crewed or uncrewed and does not need to be a low-observable aircraft.

The Air Force will release a final request for proposals by the end of 2022 once requirements are locked in.

“The KC-135 will be 70 years old when the Air Force expects to receive its last KC-46 delivery in 2029, and replacing these vital aircraft continues to be critical to the Air Force mission to project Rapid Global Mobility in today’s strategically competitive environment,” the Air Force said in a release.

“The Secretary of the Air Force has committed to a continuous recapitalization of tanker aircraft,” Air Mobility Command boss Gen. Jacqueline D. Van Ovost said at the Airlift/Tanker Association’s October conference. “We’re going to have a bridge tanker—we’ll have a full and open competition—on an aircraft to continue to recapitalize … the KC-135.”

While the sources sought notice is seeking interested companies, just two aircraft are mature enough for the competition: the KC-46 and the Airbus A330 Multi-Role Tanker Transport, which lost to the Pegasus in the previous competition.

The announcement comes amid continued public criticism of the KC-46 program on Capitol Hill. During a June 16 hearing, multiple members of the House Armed Services Committee said the Air Force should consider re-competing the KC-46 program because of extensive delays and performance issues with the Boeing aircraft.

Rep. Rob Wittman (R-Va.) accused the Air Force of paying $226 million for a “lemon.” He said “it is time that something changes.”

Acting Air Force Secretary John P. Roth defended the program and said re-competing the tanker program makes no “economic or business sense.” The best way forward, he said, is to work within current contracts to improve the aircraft to make it “hopefully ready” by 2023 or 2024.