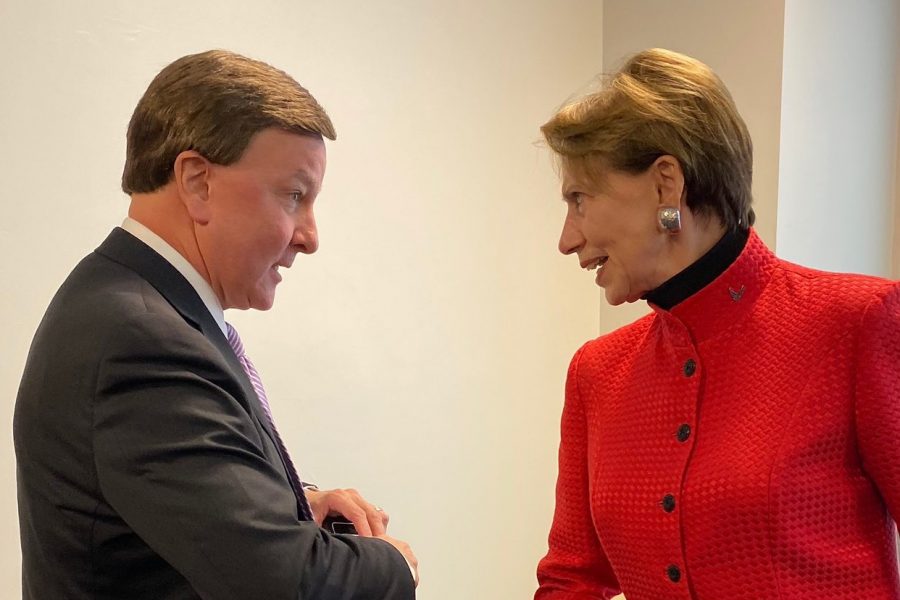 Many factors combined to slow the creation of an independent armed force for space before it took off this year: politics, higher legislative priorities, military officials trying to protect the piece of the pie they already had.

“The biggest problem came from the Air Force. It’s fighter pilot-dominated,” he said. “[Space] has been their cookie jar, their money pot for years, that they’ve always gone to take money out of when we didn’t give them what they wanted for air programs. … They did not want to see that money pot taken away.”

For space to have a fighting chance to grow as a military domain, Rogers argued, it needed a separate budget and culture that the Air Force couldn’t shrink. Ultimately, the Space Force appears set to fall under the Air Force and answer to the same Secretary.

Some of the Joint Chiefs also fought against the prospect of adding a sixth organization that would compete for a slice of the budget. Rogers said that instead of edging out the older services, he expects Congress will provide more money for space assets, and the overall budget will grow.

Air Force leaders opposed the idea of creating a new organization to handle space, but eventually got on board with the prospect of a service within a service. Under the draft fiscal 2020 National Defense Authorization Act released Dec. 9, Air Force Space Command would evolve into a Space Force with its own Chief of Staff to oversee satellite operations and related missions.

“Trump’s belated support of a Space Force does not make this a Republican idea,” Cooper added. “Focus on space has been bipartisan since the first Pentagon Space Command in 1985, an initiative that was sadly terminated in 2002 when America got distracted by the War on Terror.”

Vice President Mike Pence, who chairs the National Space Council, worked behind the scenes to get senators on board as well, Rogers said.

“The Senate Armed Services Committee had not been focused on this like the House had, so it took some additional help to help get them to where we are, but they did,” he said. “I really appreciate the vice president’s help on the Senate side.”

Senate language stopped short of giving the Space Force the right authorities to organize, train, and equip space experts as a full-fledged armed force. Rogers said that the final Space Force language was done weeks ago, but that others weren’t always happy with what they got in return for agreeing to the new service.

The draft NDAA gives the chief of space operations 18 months to stand up the early version of the Space Force, though without any set guideposts. It’s up to the CSO to determine what should be done by the end of that year and a half. Lawmakers also argued over what leadership structure the service should have and how to bring in personnel from the other armed forces.

Keeping Army and Navy assets out of this initial legislation helped convince lawmakers that the bill was similar to the original Space Corps plan and no new surprises were hiding in the language.

“One of the concerns the Senate had was we were trying to do too much at one time,” Rogers said. “This helped put them at ease that this is going to be a gradual process over the next three to five years to get to the fully decorated Christmas tree, or in this case, … Space Force.”

Cooper and Rogers were hesitant to endorse the idea of a Department of the Space Force as the White House wanted, but left open the possibility for later.

Congressional appropriators haven’t yet released a joint 2020 spending bill, which would allow the Pentagon to use the green-lit funds to launch the new service. Spending language could also differ from what authorizers approved.

“I don’t know of a problem, but that changes by the minute in this town,” Rogers said. “But I don’t expect it. I do know that the … [House Appropriations Committee Ranking Member Rep. Kay Granger (R-Texas)] is a big proponent of the Space Force. I haven’t talked to her counterpart.”