The Air Force must undergo a massive growth in its operational squadrons to meet the possible threat of war with a major power, adding 74 operational squadrons and tens of thousands of airmen to strengthen the “clenched fist of American resolve,” Secretary Heather Wilson announced on Monday.

Wilson said the service needs to grow to 386 squadrons from its current number of 312 by 2025-2030. If Congress approves the plan, that would be the most squadrons the Air Force has had in 30 years, since the peak of the Cold War, said Wilson in her keynote at AFA’s Air, Space & Cyber Conference on Monday. 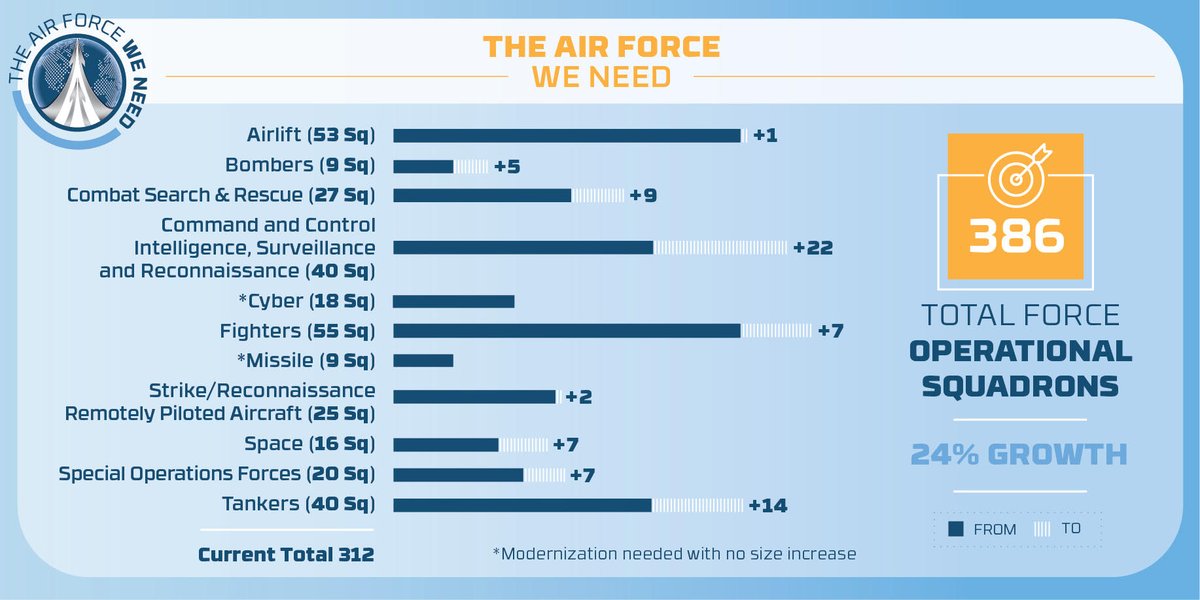 The growth—a 25 percent jump in the number of operational squadrons—is the result of a six-mont?h analysis, based on wargames, modeling, and simulation. Top officials on both the air staff and major commands participated, using recently gathered intelligence on potential adversaries and the most recent concept of operations. The nation will rely on the Air Force to lead the fight, and the current size is much too small to meet what the country is asking, Wilson said.

Even though the Pentagon plans to create an entirely separate military service for space, the Air Force projection outlined by Wilson does increase the current force structure for space operations.

In order to fill those squadrons, the service will need to grow its endstrength by at least 45,000, Lt. Gen. Brian Kelly, deputy chief of staff for personnel, said at the conference.

“It takes all of us to get that combat power ready and able to fight,” Wilson said. “A fist is nothing without the weight of the body behind it.”

Air domination is not a “birthright” for the US, but is a choice the country needs to make. A choice “by a nation that is not naive about the existence of evil, and new threats are emerging to which our generation must respond,” she said.

Wilson’s announcement did not include a budget breakdown, projections on the amount of aircraft needed, or specific numbers on the amount of personnel required. But, Kelly said it would require “new monies on top, as opposed to taking from existing airmen.” The changes “have to be additive” and are going to be dependent on “bold advocacy” and on the Air Force being able to “tell our story.”

Information released by the Air Force does not break down the squadrons by component, so it’s not immediately clear how the changes will impact the Air National Guard or Air Force Reserve structure. Chief of Staff Gen. David Goldfein on Tuesday is expected to elaborate on the plan, explaining how the proposed change will affect the way the Air Force fights.

The whole Air Force is moving to a “higher level” of readiness, but the current size is far too short to meet what the country asks of it, Wilson said.