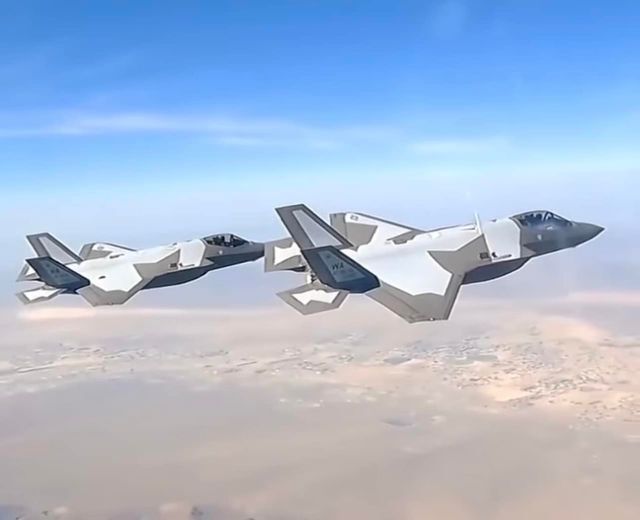 Editor’s note: This story was updated at 6:59 p.m. Eastern time June 21 with additional information from the Air Force.

The new “Splinter” camouflage on aggressor F-35s at Nellis Air Force Base, Nev., shouldn’t negate or interfere with their low observability, meaning they can truly play the role of a stealthy sparring partner for USAF fighters, according to a Nellis spokesperson.

The first two F-35s to appear in camouflage were revealed June 9 at a Nellis ceremony to reactivate the 65th Aggressor Squadron, wearing a paint scheme reminiscent of both the Russian Su-57 Felon and Chinese J-20 fighters.

“Nellis maintenance personnel applied alternate paint to create the unique camouflage scheme after coordination with the F-35 Joint Program Office,” the Nellis spokesperson said in an emailed response to a query.

“While the application of the alternate paint is a first, we do not anticipate it will have any adverse impacts on the F-35’s low-observable properties,” the spokesperson said. “The alternate paint can be removed at any time to return our aircraft to the original configuration.”

However, he later added, “Further testing will be required to discern if there is a difference in the
low-observable properties. A standard Air Force aircraft paint was used for
the paint scheme, and [Lockheed Martin] engineers approved the use and process
of paint application.”

A Lockheed Martin spokesperson said the company was “not involved in selecting or applying the paint.”

Since the first F-35s began coming off the production line, with the exception of national insignia, all F-35 aircraft have had the same finish, although a production line change from a few years ago replaced the light-gray raised material over some panel lines with material of a darker color. Lockheed Martin has explained that the gray-on-gray finish results from the special materials, paint, and coatings required to achieve a low-observable effect. Some of these coatings have a dull, flat appearance, while others are somewhat more glossy. The finish around panel lines is different, for example, from finishes on dielectric surfaces, such as the radome and leading edges. Under certain lighting conditions and from some angles, the underlying silver metallic sheen of the F-35 shines through.

However, the camouflage on the 65th’s aggressor F-35s is limited and does not cover the entire aircraft. No camouflage has been applied to the underside of the jets.

The exact function of the F-35’s paint and coatings is classified but is known to help reflect radar energy from some directions while absorbing, attenuating, or altering it in others, to reduce the aircraft’s radar return. The dull gray color also makes the F-35 harder to see at night.

The F-22—also a fifth-generation stealth fighter—has a different camouflage, which sources have said plays a role in confusing adversary imaging infrared systems. The application of the darker F-22 camouflage shapes, known within Lockheed Martin as “the amoebas,” is an extremely precise process requiring robots to ensure that the paint has no high or low spots that would affect the aircraft’s radar reflectivity.

Unexplained is why, in some air-to-air images, one of the aggressor F-35s is fitted with radar reflection enhancers, positioned on the fuselage near the trailing edge of the wings, and the other is not.

The 65th has used F-5s, F-16s, and F-15s to simulate adversary aircraft in the past but was disbanded in 2014 due to financial restrictions imposed by the Budget Control Act. In 2019, the Air Force said it was planning to reactivate the unit and that it would have some F-35s.

The two F-35s painted in the new scheme are of an older batch and will not be upgraded to the Block 4 configuration, an Air Force official said. Their degree of stealth makes them a good stand-in for China’s J-20 or FC-31, he said.

The Air Force has also recently changed course regarding the use of commercial aggressor platforms. Several companies have been fulfilling ADAIR (short for “adversary air”) contracts for the Air Force, but the service recently decided that third- and fourth-generation types such as the Mirage F-1 and even F-16s are no longer sufficient for Air Force pilots to train against.

“What we’re finding, now … is these contracts aren’t very effective at Nellis at the high-end training”, said Lt. Gen. David S. Nahom, deputy chief of staff for plans and programs, in testimony before the Senate Armed Services Committee on May 17. The older aircraft “are not providing us what we need,” he said, and USAF doesn’t plan to renew all such contracts when they expire.

China, Nahom said, has “stepped up” the capability of its combat air forces, so “we have to step up our replication” at the two “high end” threat-simulation exercises that run at Nellis and the Joint Pacific Alaska Range Complex in Alaska. The contract ADAIR companies may continue work at fighter training units, where they are “very effective,” he said.

Aggressor pilots study and employ the tactics used by potential adversaries, with the goal of giving USAF fighter pilots multiple experiences at realistic air combat before the students ever go into actual battles. The “Red Baron” studies of the 1970s determined that the survival rate of fighter and attack pilots went up dramatically after 10 missions, and the aggressor program was intended to give pilots those 10 missions in a safe but stressful environment. USAF fighter pilots have reported that real-world combat has been less taxing than the tough encounters they had at Red Flag and other high-end, live-fly wargames.

Nahom also said USAF is stepping up its investment in live, virtual, and constructive (LVC) exercises because it can’t reveal all its fifth-generation tactics in an open-air, live-fly setting.