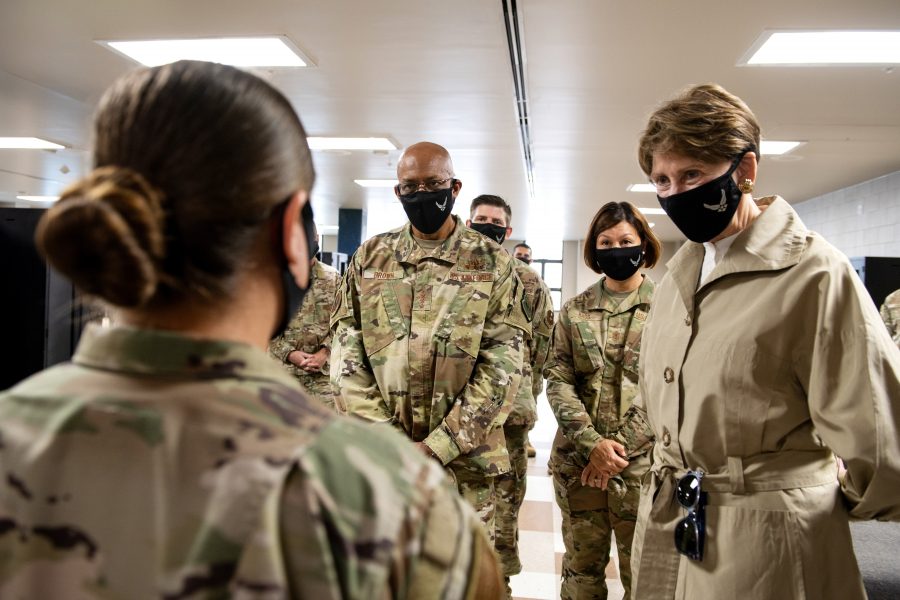 The Air Force hopes to make up lost ground in battling its chronic pilot shortage with Undergraduate Pilot Training 2.5, which takes advantage of newer technology such as virtual reality and artificial intelligence, as well as increased simulator time, to allow students to progress at their own pace.

“There was a little bit of a slowdown in production” of pilots due to the pandemic, Brown said in an Aug. 21 telephone press conference, without offering any numbers. With the new UPT 2.5, however, “they are actually trying to pick up the pace. They haven’t actually lost any flying days,” he added.

The trip was intended to highlight the importance of training and the need to adopt innovative approaches to professional military and technical training, Barrett said.

Air Education and Training Command had expected to produce between 1,350 and 1,400 pilots in fiscal 2020, but the actual number is likely to be about 1,200, according to command officials.

Brown said it’s “a little too early” to see the broad effects of the new pilot training system and the number of pilots who aren’t exiting the service, given the huge slowdown in airline hiring. He’s not sure that picture will be crystal clear even when there is COVID-19 vaccine available. But UPT 2.5 is going faster than expected, standing up at Randolph already. Vance Air Force Base, Okla., “was going to be a few months to a year off, … but they actually came forward and said they’re ready to go now,” Brown said.

Brown, Barrett, and Bass had an opportunity to try the virtual reality goggles and simulator-like Immersive Training Devices and talk to student pilots.

“The challenge,” Brown said, “will be … how do they scale this” to larger numbers of students and institutionalize the idea of allowing students “to move at the pace of the student’s ability to absorb” the training.

Brown’s not concerned about more of the pilot training program moving to simulation, and away from real-world flying sorties. He said he was checked out in a C-130J through simulator rides only and was “fully qualified to fly the airplane” afterward. “I didn’t really notice that much difference” between the two, he said. While it’s important that students hear the engines and “smell the JP-8” fuel, “by and large, you can get a lot done in a good simulator,” he said.

Asked about instructor pilots who have raised concerns about students moving to majority-simulator training, Brown said he expects resistance to any new idea.

“Anytime we try to change anything, you’re going to move somebody out of their comfort zone,” he said. While there may have been such objections a year ago, “I think we’ve moved on from that.”

Brown likes that students who are doing well can advance on their own, thanks to digital tracking of their progress and proficiency. “We don’t have to slow them down, and we can get them done a bit faster,” he said.

An increased use of simulation is not risk free, Brown acknowledged, but “I think it will make us better over the long run.”

Barrett and Brown were also asked if some of the programs in the Air Force’s overstuffed combat aircraft shopping bag will have to be dropped due to expected flatter budgets ahead.

Brown said he had a meeting in Texas last week with the major command bosses “to really talk … about the fighter portfolio,” because “we will have to figure out how best to max that capability.” The “money aspect and the capability aspect, … we’ve got to do those in concert,” so it will be a “mix and match of capabilities that we have to work through,” to include new airplanes and those “we already have.” Some of the force will be sustained and upgraded, “and we’ll have to make some choices on how best to do that. And that’s part of the conversation we’re having right now inside the Air Force.”