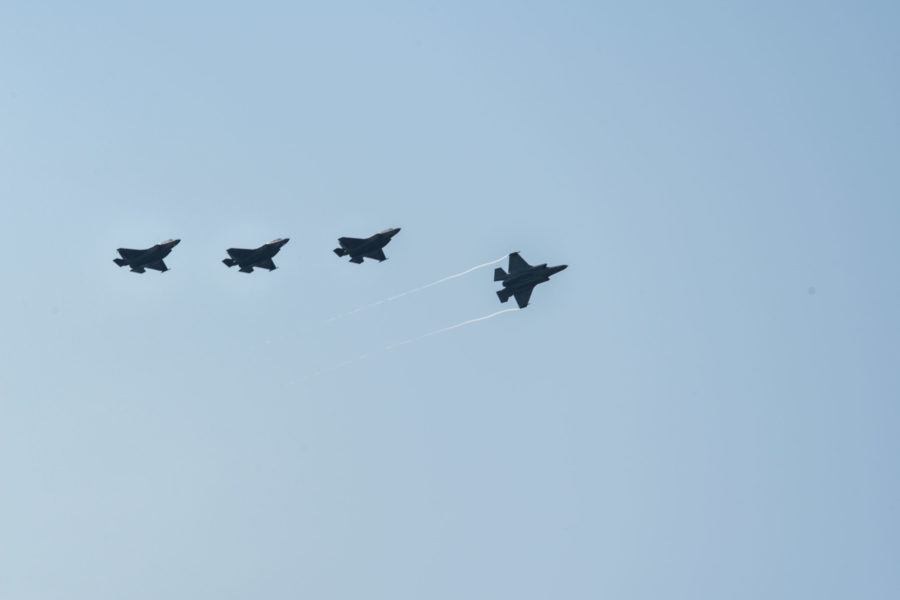 The joint air exercise Vigilant Storm was already one of largest held on the Korean peninsula. Originally planned for Oct. 31-Nov. 4, the exercise was meant to involve about 1,600 sorties and 240 aircraft, U.S. Air Forces Korea said. About 100 of those aircraft are U.S. Air Force planes.

Austin did not say when the exercise will conclude. In a statement, Pacific Air Forces, which is supporting the exercise, said it was “ready to respond to any crisis” but did not give further details about its future plans.

The decision to extend the exercise followed North Korea’s launch of an intercontinental ballistic missile and other provocative steps, including North Korean artillery fire into areas near its maritime border with South Korea.

“We have administrations in Washington and Seoul that are intent on demonstrating resolve,” said Robert Einhorn, a senior fellow at the Brookings Institution and the former assistant secretary of state for nonproliferation. Dictator Kim Jong-un “is reacting to that. I think he sees he may be up against a determined combined adversary. And he is trying to intimidate them. I don’t think it’s going to work. But I think that’s his goal.”

The growing tensions on the Korean peninsula come as South Korean Defense Minister Lee Jung-sup said North Korea might conduct another nuclear test, its seventh nuclear test since 2007, in the coming weeks.

Echoing words from the U.S.’s recent Nuclear Posture Review, Lee cautioned Pyongyang that any attack with a nuclear weapon would “result in the end” of Kim Jong-un’s regime “by the overwhelming and decisive response of the alliance.”

In September, Kim vowed he would “never give up” his regime’s nuclear weapons and has since conducted dozens of missile tests, including ICBMs.

Fifth-generation F-35 stealth fighters from the U.S. Marine Corps and the South Korean military, as well as U.S. Navy and Army assets, are involved. Australian aircraft are also taking part.

Lee was in Washington for previously scheduled meetings with Austin and other defense leaders. In a joint communique issued by the Department of Defense and South Korea’s defense ministry, Austin and Lee pledged to “return to large-scale field exercises” in 2023.

“One of the things that sends a strong deterrent message is our ability to work together and to be interoperable and our ability to train our troops to a high level of capability and also maintain a combat-credible force in the region,” Austin said. “Most recently, you’ve seen us focus on that in a major way again.”

The USS Ronald Reagan has been conducting exercises in the region since September, including joint drills with South Korea and the first port call of a U.S. aircraft carrier to South Korea in four years.

The U.S. and South Korea paused major military exercises during the administration of President Donald Trump, who sought to achieve a diplomatic breakthrough to denuclearize the Korean peninsula with the Kim regime. Two summit meetings were held, but those efforts failed.

“Kim Jong-un has a very ambitious nuclear and missile program,” Einhorn said. “He’s methodically going about achieving those goals. And they require lots of testing. So far, it’s involved missile testing, but I think sooner or later, and probably sooner, it’ll involve nuclear tests as well. One reason for this barrage of missile tests is to verify the performance of these systems. But the artillery is a different story. They know the artillery performance. I think that’s showing North Korea’s defiance of the joint U.S.-ROK military exercises.”

At his press conference, Austin said the U.S. would not permanently deploy more assets to South Korea, such as the Air Force’s nuclear-capable fighters and bombers.

“We don’t have a plan to change our permanent positioning or stationing of assets on the peninsula currently,” Austin said. “But you’ll see assets move in and out on a routine basis.”

Austin’s visit with Lee featured a visit to Joint Base Andrews where the two defense chiefs observed B-1 and B-52 bombers.