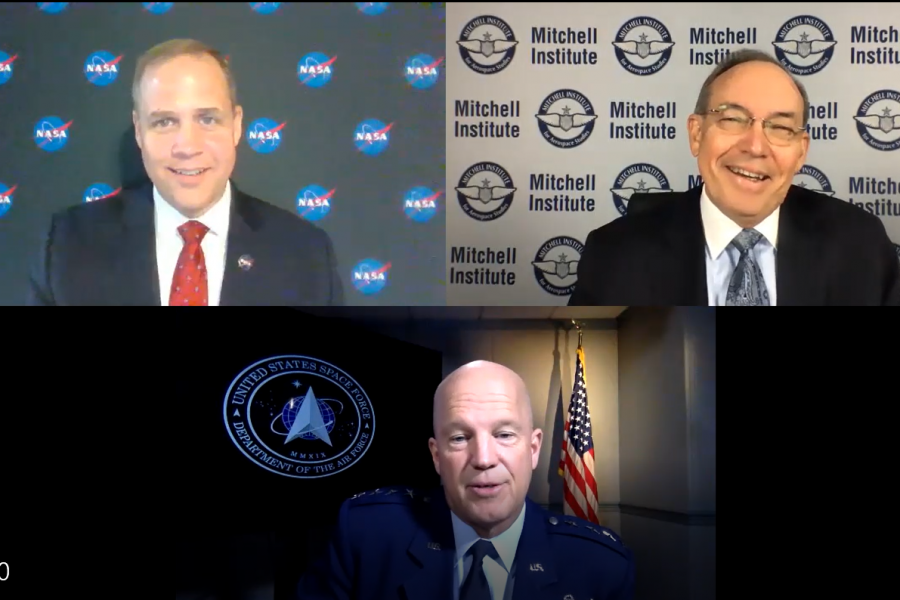 America’s civilian and military space agencies are walking a fine line with Russia.

On one hand, NASA wants to preserve the partnership with its Russian counterpart Roscosmos that has spurred cultural and scientific exchange on the International Space Station and other joint missions since the 1970s. On the other hand, the Space Force was created to outpace Russian military activity in orbit, and it often publicly chides Moscow for what the U.S. sees as threatening behavior toward assets like satellites.

The U.S. must manage that dynamic as well as its relationship with China as the three countries vie for orbital dominance, aim to establish a presence on the moon, and grow commerce in the space between celestial bodies. The Space Force is taking on a new role as protector of U.S.-led civilian and commercial efforts in orbit and on the lunar surface, while NASA will continue to handle manned spaceflight and scientific ventures for civil purposes.

The potential effects of chilly U.S.-Russia political relations on space collaboration—like driving Russia and China closer together—have been scrutinized for years. That gets more complicated with the Pentagon’s current strategy of competition with Russia and China as global powers it believes are threatening the world order with weapons and risky maneuvers in space.

“There’s a long history, even in the height of the Cold War, there was great collaboration in the civil sector. There’s always been strong collaboration with Russia and NASA. I think that’s a benefit for our nation and I think it’s something that should continue,” Space Force Chief of Space Operations Gen. John W. “Jay” Raymond said Sept. 22 during an AFA Mitchell Institute for Aerospace Studies event. “Whenever countries disagree, there’s always been agreement on partnership on the civil use of space.”

NASA Administrator Jim Bridenstine noted during the event that November marks 20 years of astronauts and cosmonauts working and living together on the ISS.

“There’s a lot of history here. The Space Force has a very different mission than NASA, but as far as a tool of diplomacy, I think we’re doing good by our nation,” Bridenstine said.

He did not comment on whether NASA plans to continue that tradition of diplomacy by working with Russia on the Artemis program, which plans to send the first woman and next man to the surface of the moon in 2024 and set up sustainable life there by 2030.

While Russia and the U.S. have a historic tradition to uphold, America and China lack the same sense of kinship.

Raymond declined to offer specifics on how the Space Force should work with China to make space a more peaceful domain in the future, noting that the U.S. asks all countries to operate safely and professionally.

Bridenstine noted that NASA is legally blocked from working bilaterally with China, though that could change if Beijing extends its own olive branch or if Congress passes a less restrictive law.

Just as the U.S. military is trying to firm up ties with countries in Africa and South America, where Russia and China are waging significant influence campaigns, it is gathering a modern alliance of nations that want to join America on the moon.

Twenty-six countries are interested in partnering with the U.S. on Artemis, Bridenstine said. He argues that NASA could use involvement with Artemis as an incentive to act responsibly in space: “We want you with us, but we also need you to agree to basic norms of behavior,” he said.

“We decided, when we saw the level of interest and enthusiasm, that we could use this as a tool to compel behaviors in space that would be appropriate for a spacefaring nation. A lot of those behaviors are already enshrined in the Outer Space Treaty, for example, and they’re agreed to with conventions like the Liability Convention and the Registration Convention,” Bridenstine said. “Not all international players are as good at adhering to those agreements as we would like them to be.”

NASA and the Space Force can work together to create new norms in space, which could shape behavior around how to maneuver near assets that belong to someone else, to ownership of resources mined on the moon, Raymond added.

The two will move forward under an updated memorandum of understanding, signed this month, that outlines 11 areas of collaboration like furthering deep space tracking technology to deepening the shared talent pool.

Bridenstine indicated the U.S. can do more to ensure existing space agreements are doing enough to keep all parties safe alongside the military mission to do so. Growth in the military and commercial sectors could regularly put the 1967 Outer Space Treaty’s Liability Convention to the test, for example. That language dictates that a country that launches a spacecraft “shall be absolutely liable to pay compensation for damage caused by its space objects on the surface of the Earth or to aircraft, and liable for damage due to its faults in space,” according to the United Nations Office for Outer Space Affairs.

“We’re seeing satellites break apart and we’re seeing things get jammed. The question is, can we test the Liability Convention in a more robust way?” Bridenstine said. “The Outer Space Treaty is not just for fun and games, it’s intended to actually modify behavior in space. If we’re not testing the Liability Convention, then it’s really not worth the paper that it’s written on. So I think we need to be maybe more forward-leaning on ensuring that the Outer Space Treaty is adhered to.”