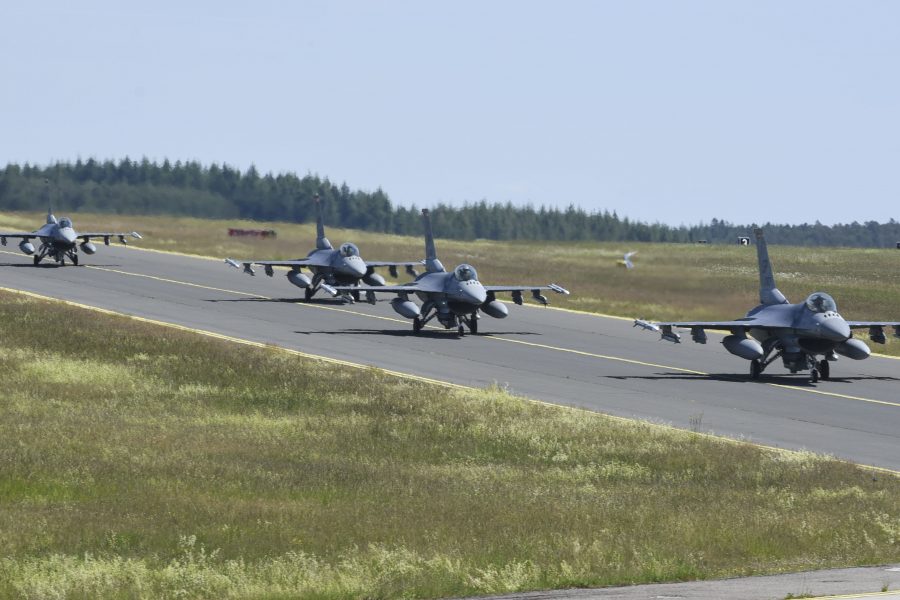 If completed, the plan would shrink the U.S. mission in Germany, which has been a key strategic location for American military operations since the end of World War II. Even now, 75 years after the war’s end, Germany hosts one of the largest contingents of U.S. troops in the world.

Esper made the announcement in a joint briefing with Vice Chairman of the Joint Chiefs of Staff Gen. John E. Hyten and U.S. European Command boss Gen. Tod D. Wolters. The Defense Department will move 11,900 people out of American military installations across Germany, Esper said, including 6,400 whose jobs would return to the U.S. The remainder would be relocated elsewhere in Europe.

Moving F-16s from the 52nd Fighter Wing at Spangdahlem to Italy will “better increase security along NATO’s eastern flank and help preserve peace,” Air Forces Europe said in a statement.

Details for the planned move are still in the works, and orders for Airmen soon headed to Spangdahlem will not be canceled. Service members will be told of “re-stationing decisions well in advance in order to prepare themselves and their families for their move,” USAFE said.

The last major downsize at Spangdahlem came in 2013 with the departure of the 81st Fighter Squadron, the last A-10 unit based in Europe. In 2010, the 22nd and 23rd Fighter Squadrons were combined to form the 480th Fighter Squadron. The 52nd Fighter Wing, which has one squadron plus a medical group, mission support group, munitions maintenance group, operations group, and other agencies, totals about 5,000 personnel. The Air Force did not provide details on how such a move would impact force support at the base.

Meanwhile, two wings that had planned to move to Spangdahlem will now stay put. Both the 100th Air Refueling Wing and the 352nd Special Operations Wing will remain at Mildenhall in the United Kingdom.

Esper said force changes could start to take place within weeks. Wolters said Spangdahlem’s 52nd Civil Engineering Squadron could “move soonest, at a time to be determined,” bound for Italy.

Esper estimated the cost to be “several billion dollars,” but did not provide a formal estimate. “I’d say single digits [of billions], but that’ll be spread out over time,” he said. Costs would include military construction and permanent change of station moves for Airmen and their families.

U.S. European Command is broadly restructuring to better address the needs of the National Defense Strategy, which focuses on advanced military adversaries like Russia and China rather than insurgents in the Middle East. Major changes are also envisioned for the U.S. Army in Europe, including moving the 4,500-member 2nd Calvary Regiment home to the U.S., rotating Stryker units to the Black Sea region, and basing a lead element of the Army’s V Corps in Poland.

Esper said the strategic goal is to move away from permanent basing in favor of “dynamic force employment,” enabling the military to proactively move troops as missions demand. DOD is also rethinking its brick-and-mortar infrastructure amid fears that permanent bases could be vulnerable to attack. This line of thinking is the same as the Air Force’s bomber deployments that have become prevalent in the Pacific.

“The deployment of rotational forces from the United States we have observed whether it’s the BCTs going from the United States to Korea, to Poland, or the bomber task force, we’re finding that they are deploying at a much higher level of readiness,” Esper said. “And while they are deployed, they are able to sustain a much more fixed focus on their mission and their capabilities.”

Wolters said EUCOM aims to rotate units “in perpetuity in multiple locations.” He said “the flexibility that this affords us certainly complicates a potential enemy against us, and it dramatically improves our operational capability to more effectively deter and defend.”

The Air Force is investing to improve other bases across the region, including facilities in Poland, Estonia, and Romania.

But plans accelerated after President Donald J. Trump said in June he intended to pull U.S. forces from Germany because that nation had failed to invest enough of its own money in defense. Pentagon leaders on July 29 sought to highlight the strategic goals of the moves, but Trump said the impetus is largely to punish Berlin.

“Germany’s delinquent, they haven’t paid their fees, they haven’t paid their NATO fees,” he said, referring to NATO’s stated goal for member nations to spend 2 percent of their gross domestic product on defense. “They’re way off, and they’ve been off for years and they have no intention of paying it. And the United States has been taken advantage of on trade, and on military, and on everything else for many years,” the president said. “Germany owes billions and billions of dollars to NATO, and why would we keep all of our troops there?”

In addition to moving the F-16s, EUCOM will relocate its own headquarters from Stuttgart, Germany, to Belgium, where NATO has its headquarters. U.S. Africa Command will also move out of Stuttgart, though its ultimate destination is yet to be determined, Wolters said.

NATO Secretary General Jens Stoltenberg said in a statement that U.S. consultations with allies ahead of the announcement “underlines the continued commitment by the United States to NATO and to European security.”

But in Washington, members of Congress from both parties criticized the decision. Sen. Mitt Romney (R-Utah), who offered a failed amendment to the 2021 defense policy bill that would have blocked such a move, called the plan a “grave error.”

“It is a slap in the face at a friend and ally when we should instead be drawing closer in our mutual commitment to deter Russian and Chinese aggression,” Romney said in a statement.

Rep. Adam Smith (D-Wash.), chairman of the House Armed Services Committee, criticized the administration for failing to be more consultative in drafting the plan.

“Not only does the plan fail to consider major logistical issues, questions about deterrence and implementation of the National Defense Strategy, and concerns about implications for U.S. efforts in Africa and elsewhere, but also it will almost certainly result in significant costs to the Department,” he said in a statement.

Sen. Jim Inhofe (R-Okla.), chairman of the Senate Armed Services Committee, was more supportive. He said on Twitter that the Pentagon’s plan is consistent with his view that the Pentagon needs to “maintain a strong forward presence, sustain force projection, and take care of our military families.”

Editor’s Note: This story was updated July 29 at 6:17 p.m EDT with additional details.