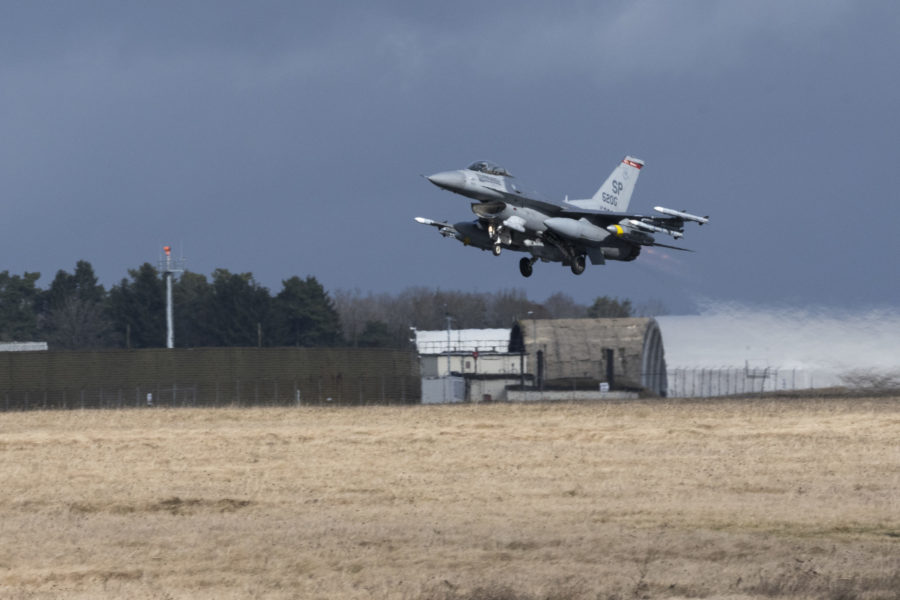 U.S. Jets Deployed to Poland, Romania Are ‘Prepared to Scramble’ in Support of NATO Air Policing

Russia has amassed more than 130,000 troops on three sides of Ukraine and increased its Black Sea naval presence to include landing vessels. On Feb. 10 it began a joint military exercise with Belarus, whose border is just 100 miles from Ukraine’s capital Kyiv. While Ukraine is not a NATO member, eastern flank allies fear a Russian incursion and redefined European borders ultimately will put them at risk.

“The deployment of U.S. F-15s to Poland elevates the collective defense capabilities on NATO’s Eastern flank and the enhanced Air Policing mission,” Harrigian said in a statement. “The commitment of U.S. aircraft and Airmen demonstrates the solidarity of the Alliance, as we continue to work together in unity to execute our defensive mission.”

USAFE spokesperson Capt. Eric Anthony said the jets will be at the ready for NATO orders.

“They will also have aircraft on standby to scramble, if required to do so, to support the NATO enhanced air policing mission,” he said by phone from Ramstein Air Base, Germany.

While Air Force participation in NATO air policing missions is pre-planned, the additional jets are the result of Russia’s troop buildup on the border of Ukraine, which shares borders with several eastern flank allies.

“There’s a linkage,” Anthony underscored. “We want to support our NATO allies, however possible, and making sure that fighters are in the right location to help NATO’s defensive posture is part of that.”

Since December, the Air Force has increased its air policing missions, first in Lask, then with two rotations in Amari, Estonia, in January that concluded Feb. 4, followed by the deployments in the last two days.

USAFE said the number of jets is meant to increase the air presence on the eastern flank of the alliance.

“You’ve seen the uptick, and the recent intel reports that were declassified and are circulating the net right now,” Anthony said, referring to reports released by the National Security Council.

The Biden administration reportedly has coordinated closely with the National Security Council to release a series of intelligence reports, including Russian preparations for “false flag” operations, in an effort to deter Russia from invading Ukraine.

President Joe Biden was on the phone with NATO allies the morning of Feb. 11, and National Security Advisor Jake Sullivan was scheduled to brief at the White House at 2 p.m. in what many believed would be an announcement about further deterrence measures by the NATO alliance to deter a Russian invasion of Ukraine.