Skip to content
An unmanned ground vehicle is tested at Tyndall Air Force Base, Fla., Nov. 10, 2020. Tyndall is one of the first military bases to implement the semi-autonomous "robot dogs" into their defense regiment, they will aid in reconnaissance and enhanced security patrolling operations across the base. Air Force photo by Airman 1st Class Tiffany Price.
Expand Photo 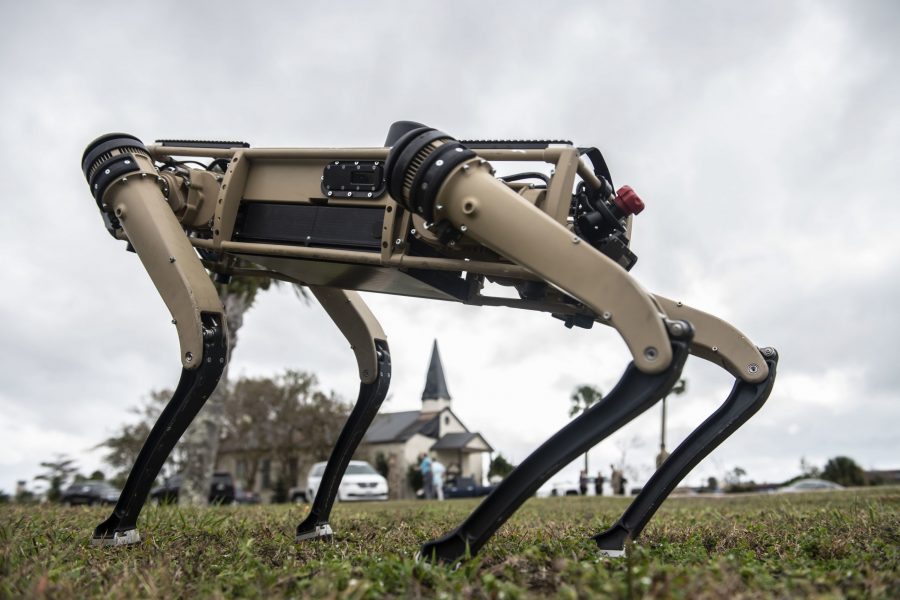 Tyndall is DOD’s First Base to Adopt Robot Dogs

The 325th Security Forces Squadron at Tyndall Air Force Base, Fla., will be the first unit in the Defense Department to start using Ghost Robotics robot “dogs” to semi-autonomously patrol the base. The unmanned ground vehicles, which walk on four legs and are outfitted with sensors and cameras, will not replace the squadron’s military working dogs, but will have a set patrol “path” on the base where personnel and cars can’t easily access.

“We are very excited. … These robot dogs will be used as a force multiplier for enhanced situational awareness by patrolling areas that aren’t desirable for human beings and vehicles,” said Maj. Jordan Criss, commander of the 325th SFS, in a release.

Security forces Airmen will “drive” the robot dogs with a virtual reality headset in an operations center, and can even issue verbal commands through a radio.

The base demonstrated the dogs Nov. 10 at an event including Tyndall leadership and the Air Force Installation and Mission Support Center. The squadron says using the dogs will free up personnel to focus on training or provide security in other areas across the base.

“These dogs will be an extra set of eyes and ears while computing large amounts of data at strategic locations throughout Tyndall Air Force Base,” Criss said in the release. “They will be a huge enhancement for our defenders and allow flexibility in the posting and response of our personnel.”

The Ghost Robotics robot dogs played a high-profile role in the Air Force’s second Advanced Battle Management System “on-ramp” demonstration in early September. As part of the event, security forces Airmen used the dogs to help provide security at a simulated austere base.