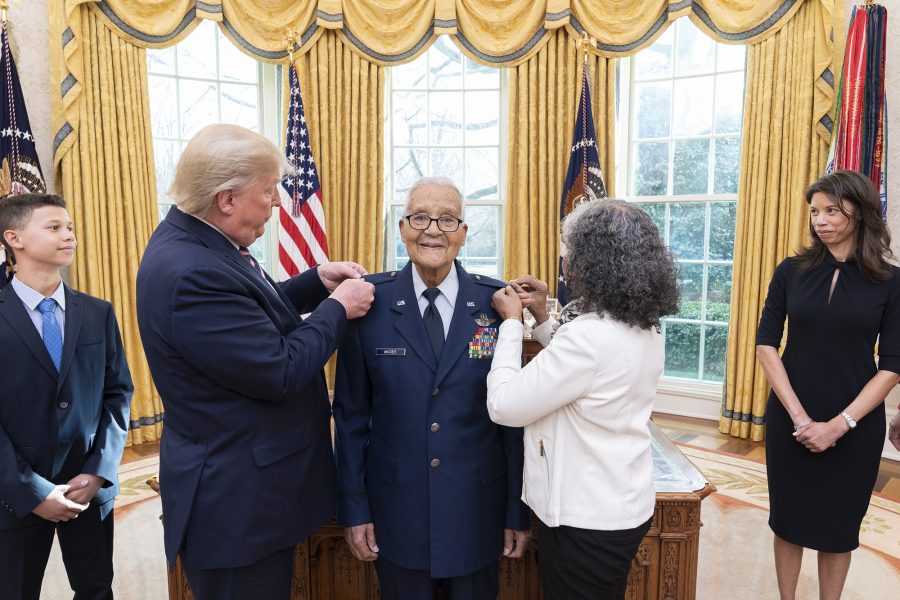 Trump Honors Tuskegee Airman in State of the Union Address

President Donald Trump honored Tuskegee Airman Charles McGee during his State of the Union address on Feb. 4, hours after pinning stars on McGee’s shoulders in the Oval Office.

McGee, who turned 100 on Dec. 7, was honorarily promoted from colonel to brigadier general in the 2020 defense policy bill. The Air Force legend served three decades in uniform, launching his career in the U.S. Army Air Corps. McGee escorted bombers over Germany, Austria, and the Balkans in the P-39Q Airacobra, P-47D Thunderbolt, and the P-51 Mustang during World War II. During the Korean War, McGee flew the F-51 on 100 interdiction missions from Japan, and he flew an additional 173 reconnaissance missions in the RF-4C during Vietnam.

Throughout his career, McGee flew a record 409 combat missions, more than any other pilot in the three wars.

“Incredible story. After more than 130 combat missions in World War II, he came back home to a country still struggling for civil rights and went on to serve America in Korea and Vietnam,” Trump said. He added, “Gen. McGee, our nation salutes you. Thank you, sir.”

Trump also offered a glimpse of future generations of airmen, touting the U.S. Space Force—the nation’s newest military service—and honoring McGee’s grandson, Iain Lanphier, an eighth grader in Arizona, who “aspires to go to the Air Force Academy” and one day work for the Space Force.

“Most people look up at space. Ian says, ‘I want to look down on the world.’”