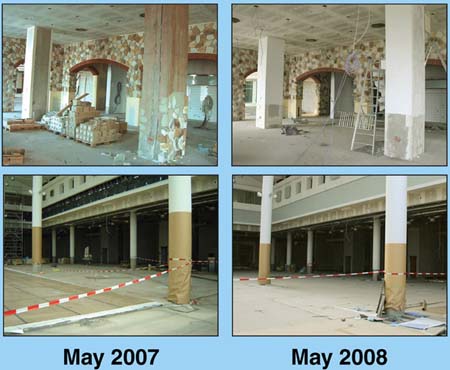 eek’s House Oversight and Government Reform hearing into the status of the Kaiserslautern Military Community Center project, lawmakers and the Government Accountability Office expressed continuing skepticism over delays, construction quality, and cost, which GAO says could rise above $200 million, some $80 million higher than originally projected. The GAO analysts in testimony did acknowledge that the Air Force “has made significant improvements in its oversight and internal controls.” However, they said that since the GAO’s review in June 2007 there has been limited construction progress—the mega-complex with hotel, theater, restaurants, and retail stores was to open in 2006—and there are “still no accurate estimates of how much the total project will cost or when it will be completed.” In his testimony, Maj. Gen. Marc Rogers, vice commander of US Air Forces in Europe, noted that USAFE has beefed up its oversight capability, creating a Resident Director Office with a staff of 29, but the real changes must come from the German state entity charged with its construction. The failure on the part of the state agency to overcome management failures led USAFE, said Rogers, to ratchet up the issue to the federal level, enlisting the help of the US Embassy in Berlin. Unfortunately, the recovery pace has been slow. As Rep. Henry Waxman (D-Calif.), panel chairman, said that despite Air Force assurances otherwise, “The project has gone further over budget and has been further delayed.” There are still ongoing criminal investigations into K-Town that involve US officials.