Skip to content
A firefighter from Travis Air Force Base, Calif., assists with the local response to the LNU Lightning Complex Fire, which prompted the installation to evacuate personnel and aircraft on Aug. 19, 2020. Photo via Travis Air Force Base on Facebook.
Expand Photo 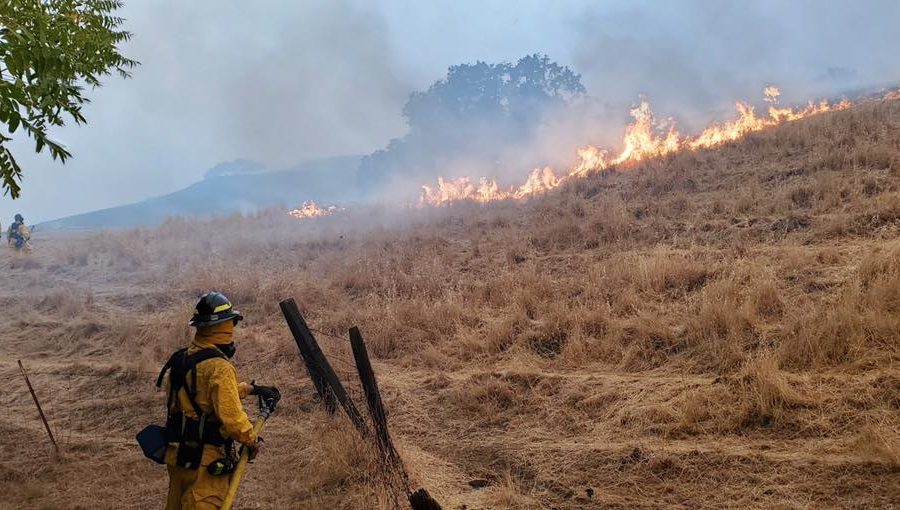 Non-essential personnel won’t be allowed to return to Travis Air Force Base, Calif., for at least one more day, and most base services remain shuttered after the LNU Lightning Complex Fire forced personnel and aircraft to preventatively evacuate from the installation on Aug. 19, according to a Facebook update from the base.

“To ensure Team Travis’ safety, base services will remain closed today, except for the gas station and dining facility, and the 60th Air Mobility Wing commander will not lift the evacuation order before Aug. 21,” the base wrote.

The blaze is still “a local threat to areas outside the base perimeter,” but hasn’t damaged the installation or any Defense Department assets, the post said. Emergency responders spotted flames within two miles of Travis’ perimeter, but the fire never breached it, wing spokesperson Capt. Amanda M. Farr told Air Force Magazine in an Aug. 20 email.

Travis’ leadership, emergency operations center team, and local authorities are all keeping an eye on the situation, the post stated.

“At this time, conditions are favorable that the potential threat to the base is continuing to diminish,” Farr wrote. “Leadership continue[s] to actively monitor the situation and coordinate with civil authorities.”

The wing temporarily moved its C-5s to Texas, and its C-17s and KC-10s to Washington state, Air Force Magazine previously reported.

“Nearly 30 aircraft were evacuated—across all our airframes (C-5s, C-17s, KC-10s),” Farr wrote. “The small number that remained was due to maintenance status and the ability to safely and expediently move the aircraft.”

The Aug. 19 evacuation also included patients from David Grant USAF Medical Center, she noted, though the wing is withholding details of where they were evacuated to due to privacy concerns.

“We are actively working the plan to return the individuals to the installation,” she wrote.

9th Reconnaissance Wing Commander Col. Heather A. Fox said the separate Jones Fire didn’t pose an evacuation risk to Beale Air Force Base, Calif, as of the night of Aug. 19.

“Currently, Beale Air Force Base is not immediately threatened by the Jones Fire in Nevada County nor the LNU Lightning Complex near Travis Air Force base other than poor air quality,” the base confirmed in a statement provided to Air Force Magazine via email on Aug. 20.

According to a screenshot posted to the “Air Force amn/nco/snco” Facebook page on Aug. 20, the air quality at the base triggered at least two Environmental Protection Agency Air Quality Index warnings that suggested the situation could be harmful to individuals with “heart or lung disease,” among others.

The same day, Beale posted information about the EPA Air Quality Index and Particle Matter Pollution recommendations and conditions to its Facebook page.

Graphics attached to the post explained different AQI index categories, who might be impacted in each category and how, as well as steps to mitigate those effects.

“We are currently in wildfire season for this region of California, which can result in elevated particulate matter levels and poor air quality conditions,” the post stated. “The U.S. EPA monitors Air Quality Index (AQI) to include particulate matter throughout the U.S. The health department effects are increasing likelihood of respiratory symptoms in sensitive individuals, aggravation of heart or lung disease and premature mortality in persons with cardiopulmonary disease, and the elderly.”

The post advised individuals suffering from respiratory or cardiac conditions, youth, and elderly people to “limit prolonged exertion“ under the current circumstances, and said concerned parties should call the base’s Bioenvironmental Engineering team at (530) 634-2045 with any questions they might have.

“Beale Air Force Base works very closely with local fire agencies to prevent wild fires and the spread of wild fires,” the base’s statement said. “We will continue to monitor the situation closely and keep our personnel informed.”

Beale is also making relevant resources and installation-posture information available on its website.

Additionally, the installation is providing temporary shelter to some families from “down the interstate” who’ve been displaced by fires, as well as staying “in constant contact with Travis AFB” to figure out how it can support the base amid its evacuations, according to the statement.

The 30th Space Wing at Vandenberg Air Force Base acknowledged a request for questions on Aug. 20, but didn’t provide a status update by press time.