Skip to content
A 914th Air Refueling Wing KC-135 boom is extended while a 157th ARW KC-46 gets closer for refueling over the Atlantic Ocean on April 28, 2020. Air Force photo by Peter Borys.
Expand Photo 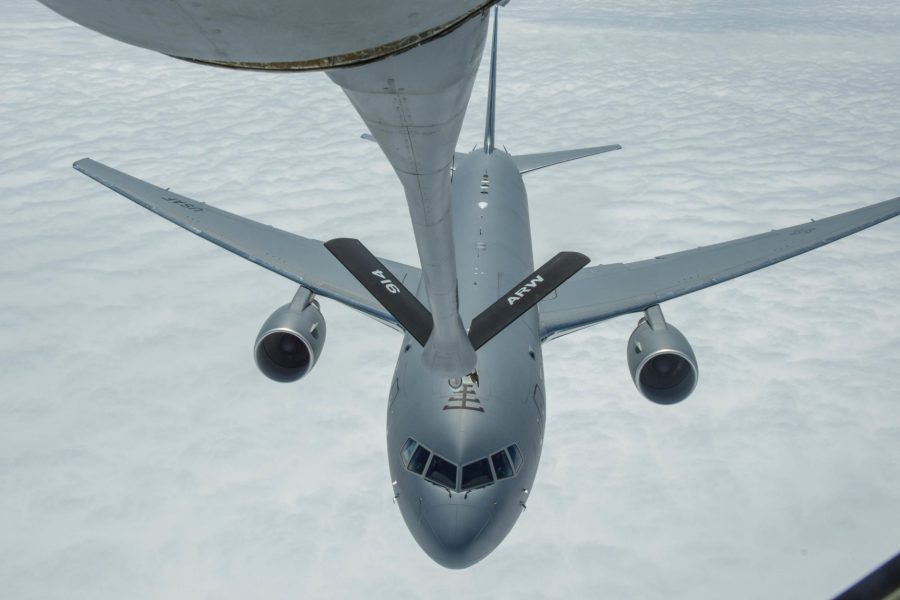 Both the House and Senate versions of the 2021 defense policy bill will keep enough legacy tankers in the Air Force to “bridge” the fleet until the KC-46 is fully operational, the head of U.S. Transportation Command said.

The Air Force called for retiring 29 KC-135s and KC-10s in its budget request, even though TRANSCOM boss Army Gen. Stephen R. Lyons said at the time that refueling is the most stressed part of his command. The service has argued it needs to cut old airframes to free up spending for new ones, though the KC-46 is still years away from being operational.

“The op tempo is actually quite high. We have not yet met our program objective of 479 tankers,” Lyons said Aug. 12 during a Foundation for the Defense of Democracies online event. “We will be healthy in the out years. Where the friction played out really on the Hill was the discussion about the delay in the delivery of the KC-46 … and the pressure to retire some of those legacy platforms as programmed, but before the KC-46 could be presented to the combatant command.”

The draft bills in both the House and Senate block the Air Force from retiring most of the aircraft it originally sought to cut, but the draft language does allow for some of the older tankers to head to the boneyard. Lyons said TRANSCOM did not advocate for all to be kept, but enough to bridge the gap. Much of the tanker capacity is in the Air National Guard and Air Force Reserve, and the cuts were mostly targeting the Active duty at a time when crews were stretched thin.

“We were about to reduce the active component tanker capacity by 30 percent or more against a force that’s already pressing deploy-to-dwell ratios,” Lyons said. “The leadership, the members on the Hill, were very attuned to the issue.”

Across the military, aerial refueling is not necessarily given the respect it deserves, Lyons said. Immediate response forces, like combat deployments and bomber task forces, require tanking on a moment’s notice, and that requirement is only going to grow.

“The range, particularly on some of these new weapons systems, are going to be relatively limited without that tanker sitting right next to them,” Lyons said. “That’s why it’s so critical. Everything that we do is [to] ensure that we’ve got a capable and a sufficient aerial refueling fleet to meet day-to-day operations, and then respond to crisis, and ultimately respond to conflict if need be.”

The remote vision system—the array of cameras and sensors a boom operator uses to refuel a receiving aircraft—is the biggest reason the KC-46 is delayed. The Air Force and Boeing in April reached an agreement on an improved version of the system, called RVS 2.0, with the planned operational capability coming in in 2023.

While Lyons deferred technical questions to the Air Force itself, he said from the TRANSCOM perspective, “there’s still a lot of work to be done between now and then, and so we’re really eager to see it. The thing I’m pleased about is we got beyond this hurdle of whether we had a problem or not. It was clear when I flew aboard the KC-46 that we had a major problem to be resolved. I think we’re on a path to resolve that.”