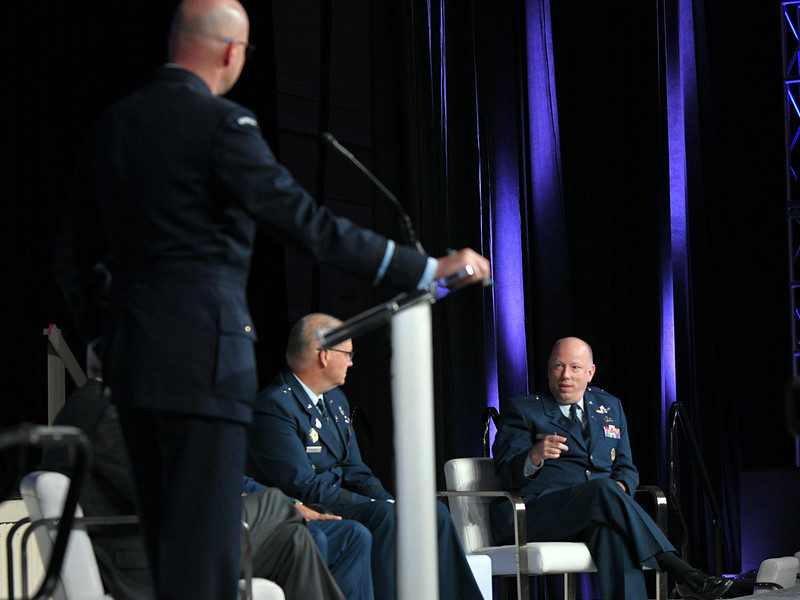 Frank Calvelli, the DAF’s first-ever assistant secretary of the Air Force for space acquisition and integration, said the industry has a role in the overall strategy to get faster.

“We have got to stop the traditional way of doing satellites—these sort of large, seven-year, cost-plus contracts—and go to smaller systems, more proliferated … and stop redesigning everything,” Calvelli said. His message to the space industry as part of that:

Calvelli along with Kelly Hammett, director of the Space Rapid Capabilities Office, and Space Force Brig. Gen. Stephen J. Purdy, program executive officer for assured access to space, all brought up the subject of honesty during their panel conversation on speeding up space acquisition at AFA’s Air, Space & Cyber Conference.

With systems becoming “hyper more technical,” Purdy, who also serves as commander of the Space Force’s Space Launch Delta 45 and director of the Eastern Range, said he wants to work with contractors who will have a frank conversation. The Senate unanimously confirmed Purdy’s promotion to major general Sept. 29.

“Especially the Space Force is getting into a deep world of cloud, and DevSecOps, and cyber, and a lot of technical stuff that a lot of us may or may not have grown up in,” Purdy said. “So when you get an industry pitch that says they can go solve the world in 60 days or less and do it for $20 million, you know, there’s just a bit of a credibility discussion that you’ve got to have.”

What he wants, on the other hand, “is for industry to understand where our systems are and what our needs are and how you can plug into those needs in a non-proprietary way so that we can continue to move along—and not try to sell me on something that I’m going to have to go buy and license from here to eternity, etc.”

Hammett pointed out that the acquisitions community needs to “stay closer” to the science and technology community “and be smart buyers” of systems with high technology readiness levels.

“If they’re not realistic, and they’re risky, or it hadn’t been done before, we need to know that, and we need to be making source selection decisions appropriately,” Hammett said.

Executing: This includes “delivering on our programs on schedule and on cost.” One things he noticed while prepping for his confirmation hearings “was that there’s a track record of being late on programs. We have to turn that track record around and actually execute.”