They’re Up and Ready 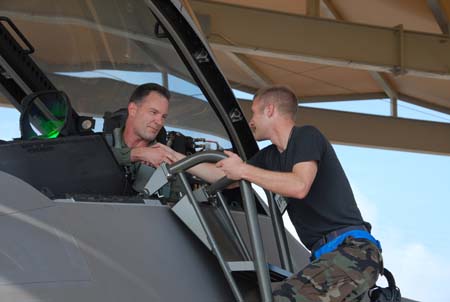 Total Force team at Elmendorf AFB, Alaska that will operate and maintain new F-22 fighters and new C-17 airlifters formally marked achievement of initial operational capability by one of two F-22 squadrons and the C-17 unit early this month, according to a Sept. 10 release. The active-duty 90th Fighter Squadron and active 517th Airlift Squadron, both part of the 3rd Wing, are now ready for combat. The base received its first C-17s in June 2007 and F-22s in August 2007. The Alaska Air National Guard’s 176th Wing and Air Force Reserve Command’s 477th Fighter Group have associate arrangements with the 3rd Wing to help fly and maintain the C-17 and F-22, respectively. Noting that his group didn’t even exist a year ago, Col. Eric Overturf, commander of the 477th FG, said, “What you have here at Elmendorf is the premier Total Force team in the world.” The Air Guard’s 249th AS partners with the active duty 517th AS, and AFRC’s 302nd Fighter Squadron works with the active 90th FS and 525th FS on the F-22. Col. Charles Foster, leader of the 176th Wing, said the active, Air Guard, and Reserve airmen at Elmendorf have a “healthy competition and compete for bragging rights, but we are committed to each other’s success.” And, Lt. Col. Charles Corcoran, 525th FS commander, commented that although much of the focus is on the new aircraft, “it’s the people who make it happen; without them, the machines would just sit on the ramp.” As evidence of the cooperative spirit, the active-Air Guard C-17 force transported the maintainers and support personnel for the active-Reserve F-22 team’s August trip to Tyndall AFB, Fla., for a final weapons systems evaluation program event before declaration of IOC. (IOC report and WSEP report by Capt. Torri White)