The Recruiting Tally Three Months In 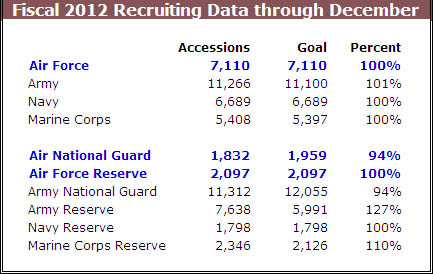 Air Force and its reserve components continue to post strong recruiting numbers so far in Fiscal 2012, according to the Pentagon’s newest recruiting figures, released on Monday. USAF’s active duty component brought in 7,110 accessions through December, exactly matching its accessions goal for the fiscal year to date, show the new data. The Air Force Reserve also met its target through the first quarter of the fiscal year, bringing in the 2,097 new recruits for whom it had planned. Meanwhile, the Air National Guard attracted 1,832 recruits through December, 94 percent of its target of 1,959. However, the Air Guard’s numbers have been steadily improving as the fiscal year has progressed, rising from hitting only 76 percent of its year-to-date goal in October and 88 percent through November. Among the other services and their reserve components, only the Army National Guard did not at least meet, if not exceed, its numerical accession goals. (See also last month’s recruiting entry.)