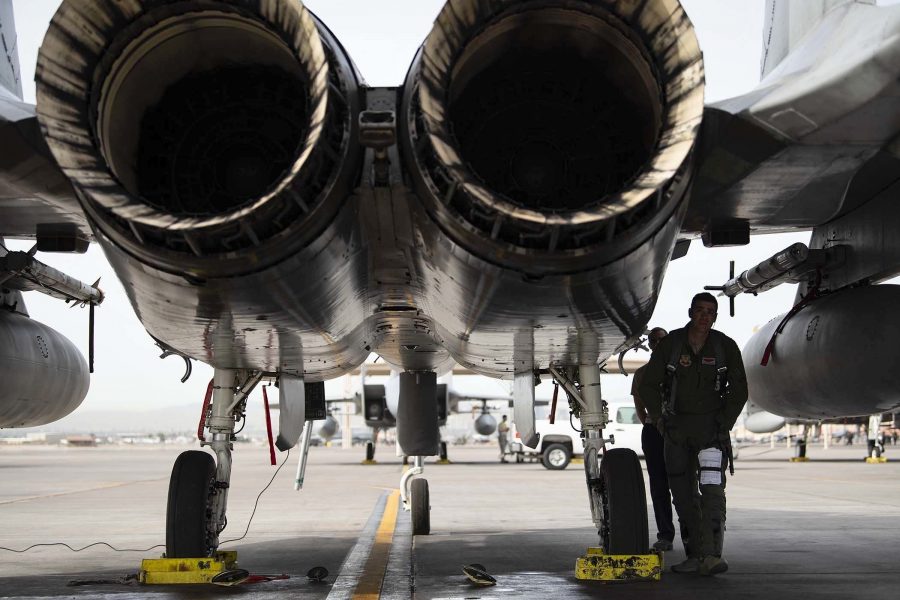 “We’re working on a Multi-Aircraft Engine Run Simulator that will allow maintainers to work on training for engine runs and for engine run proficiency runs on the F-15C, F-15E, C-130H, C-17A, C-5M, and JSTARS right off the bat,” Senior Master Sgt. Thomas “Powell” Crider said of the effort he’s undertaken with colleague Tech. Sgt. David Hill. Together, they comprise an unofficial ARCWERX-Tennessee ANG design and development shop dubbed “Belle Labs” in Memphis that formulates solutions for USAF and the Air National Guard.

The effort is expected to save USAF money, improve training quality, and boost the overall mission-capable rate.

“We use haptic gloves and a Windows mixed-reality headset to sit down and actually go through all the steps of starting an aircraft engine and then working through your emergency procedures,” explained Crider, who serves as ARCWERX’s dev team lead for AFCreate-MOTAR, the platform the simulator works off of.

AFCreate-MOTAR—short for Maintenance Operations and Training Augmented Reality—debuted in a full-feature capacity last October. An ARCWERX PowerPoint presentation provided to Air Force Magazine characterized it as “a platform for sharing and tracking Augmented-Reality, Virtual-Reality, videos, and traditional training throughout the USAF enterprise.”

“Think of it as ‘Netflix for training,’” the presentation stated.

The Multi-Aircraft Engine Run Simulator, which was commissioned by Warner Robins and will be delivered by the end of fiscal 2020, is advantageous for a few reasons, according to Crider and his ARCWERX colleagues.

The fuel expended when aircraft engines are run for training purposes is pricey, and USAF needs to dole out temporary duty travel funds to send Airmen to bases with the right simulators for training if their home bases don’t have them (as well as to cover associated lodging costs), Crider said.

For this reason, the ability of Airmen to train “in virtual reality and … on-station” will “save a whole lot of money,” he added.

The simulator also will help lower fail rates, since many Airmen study paper cockpits, but can’t remember the information by the time they’re put in a simulator.

“They fail the class. They go back home with their head hung low,” he explained. “We don’t want that to happen. We also don’t want them to have to go out and spend $10,000 to run an aircraft engine for an hour.”

Not sidelining tails for training means the simulator can also help boost the Air Force’s overall mission-capable rate, according to Crider.

“The training is better, it’s more frequent, [and] it’s higher fidelity, while simultaneously reducing the use rate on the aircraft,” ARCWERX Director Maj. Hans Jagow said.