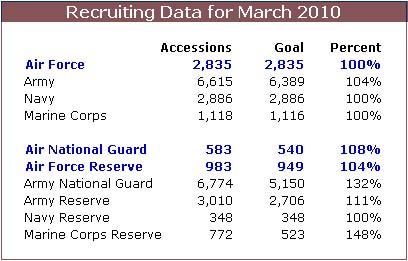 The Air Force and its two reserve components each reached or bettered their enlisted recruiting goals for March and retention remains high, according to the latest recruiting data released by the Pentagon. That’s good news, bad news: The continued rosy recruiting and retention picture prompted USAF last month to establish a new force management initiative that includes involuntary reduction efforts to ensure the service can get down to its authorized end strength of 332,800 in 2012. The service retention rate stands today at a 15-year high despite the long-running high operations tempo. Service officials have said USAF must shed some 4,800 airmen—roughly 1,400 officers and 4,400 enlisted—by the end of Fiscal 2011 and reduce accessions over the same period. (February recruiting numbers)