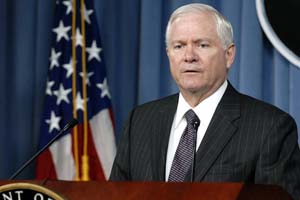 C-X tanker program will be thrown back open for competition between Boeing and Northrop Grumman, with DOD soon to have revised bids in hand. Pentagon officials hope to have a winner by year’s end, Defense Secretary Robert Gates announced Wednesday at a Pentagon press conference. “I have concluded that the contract cannot be awarded at present because of significant issues pointed out by the Government Accountability Office,” he said. Gates said he still has confidence in the Air Force’ acquisition system, noting that GAO sustained only eight of more than 100 complaints raised in Boeing’s protest of USAF’s contract award to Northrop Grumman. Nevertheless, Gates said he, “with the full support of the Air Force,” has made Pentagon acquisition czar John Young—and not USAF’s acquisition office—the authority now to oversee the program through selection of a winner, if only to give Congress “confidence” that the process is being given top-level attention.