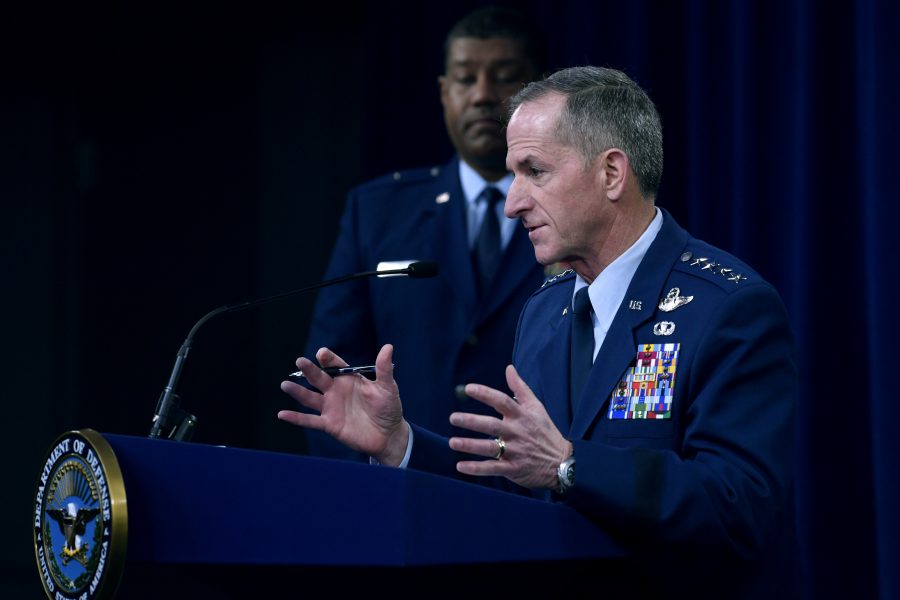 The $2.2 trillion stimulus package under consideration on Capitol Hill to deal with the spreading coronavirus pandemic would allow military leaders, including Air Force Chief of Staff Gen. David Goldfein and Space Force Chief of Space Operations Gen. Jay Raymond, to stay in their posts longer than planned for continuity, according to bill text released March 25 by the Senate Appropriations Committee.

President Donald Trump may extend their tenure “until the date of the appointment of the successor to such incumbent,” the legislation states. The Trump administration on March 2 nominated Pacific Air Forces boss Gen. C.Q. Brown to replace Goldfein, who has served as the Air Force’s top uniformed officer since July 2016. His term is set to expire this year.

The legislation “enables the President to extend the appointment of several senior military officials whose appointments are scheduled to expire during [the] COVID-19 crisis, ensuring continuity of senior military leadership,” according to a Senate Appropriations Committee summary. The Department of the Air Force did not immediately respond to questions about how the bill would affect its senior leaders’ plans.

Marta Hernandez, a spokeswoman for the Senate Armed Services Committee, said the panel is continuing to explore all of its options for moving nominations forward. Lawmakers are committed to advancing those nominees in the coming months, she said, and will take “every step we can to avoid a backlog.”

“The president may choose not to exercise this authority, in which case the Vice Chief [Gen. Stephen Wilson] could serve in the meantime,” she said of extending Goldfein’s term. “This is essentially to ensure we have all options available at this unprecedented time. … This is definitely one we are tracking closely.”

The Pentagon would get $10.5 billion as a result of the Coronavirus Aid, Relief, and Economic Security (CARES) Act’s passage, including $2.5 billion aimed at bolstering the defense industrial base and $300 million to buy new information technology equipment and grow bandwidth as the department begins to telework.

The Air Force is set to receive $712.9 million across its Active-duty and Air National Guard operations and maintenance and personnel accounts to “prevent, prepare for, and respond to coronavirus, domestically or internationally.” It’s unclear exactly how the Department of the Air Force would use those funds.

National Guard funding would pay for emergency deployments, according to Senate lawmakers. Operations dollars would go toward medical supplies and physical protection equipment on installations and ships; deployments of the hospital ships USNS Comfort and USNS Mercy; and for “increased operations and deployment schedules.”

Lawmakers want to offer $1 billion to pay for Defense Production Act purchases related to the pandemic, such as buying masks for health care workers or ventilators for ill patients. The Defense Health Program would receive nearly $5 billion, while the Defense Department Office of the Inspector General would see $20 million to audit and investigate projects carried out with coronavirus-focused funding. Another $415 million for DHP would fund vaccine and antiviral medication development, keep labs open around the clock, and allow DOD to buy diagnostic tests.

The Senate approved the package 96-0 March 25, and the House is expected to hold a vote this week. Trump supports the legislation.