Stepped Up Training with a Message

Stepped Up Training with a Message: B-52 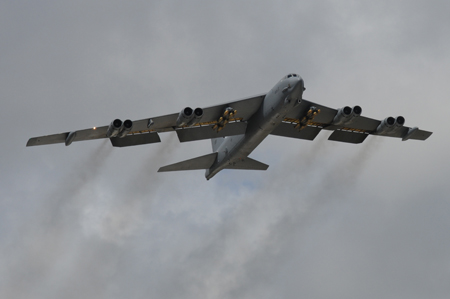 bombers operating from Andersen AFB, Guam, earlier this month flew a mission over South Korea as part of a training exercise, Pentagon Press Secretary George Little told reporters on Monday. The bombers’ presence was also meant to demonstrate to the North Korean regime that the United States is steadfast in its resolve to deter aggression on the peninsula, said Little. “It’s not any secret that we are in the midst of sending a very strong signal that we have a firm commitment to the alliance with our South Korean allies,” said Little. He called the B-52 flights on March 8 part of “a stepped-up training effort” with the South Koreans. Little’s comments on March 18 came on the same day that Deputy Defense Secretary Ash Carter arrived in Seoul for meetings with senior South Korean government and military officials as joint US-South Korean military exercises continued. Carter said another B-52 sortie would take place on Tuesday as part of the joint activities. The United States maintains a continuous presence of nuclear-capable bombers at Andersen. (AFPS report by Jim Garamone) (Carter transcript) (See also US Beefing Up Missile Defenses and Key Resolve Kicks Off as North Korea Ratchets Up Rhetoric.)