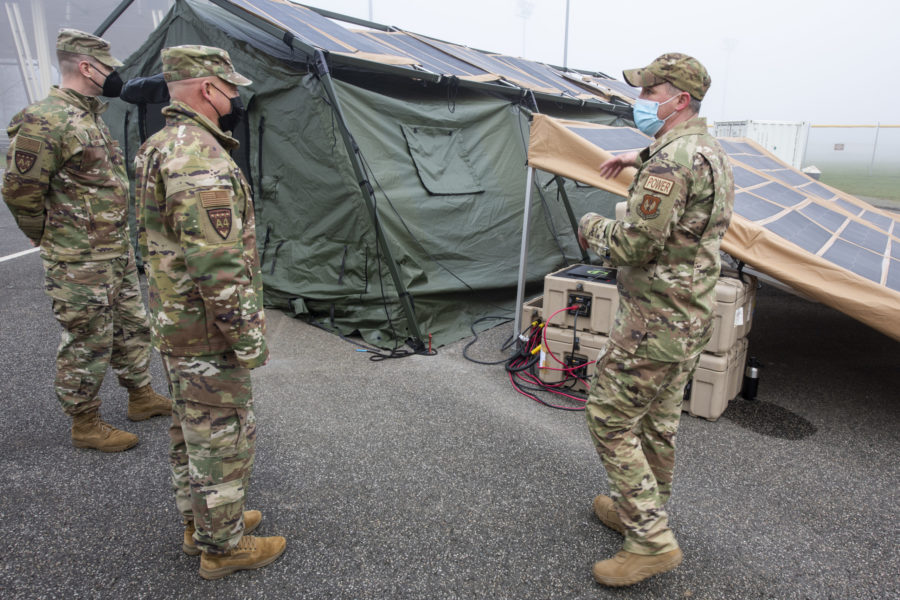 Air Force Magazine is highlighting one team each day from now through March 3. Today, we look at “Project Arcwater,” led by Senior Master Sgt. Brent Kenney and Tech Sgt. Matthew Connelly of the 52nd Fighter Wing stationed at Spangdahlem Air Base, Germany.

The note articulated five core concepts of ACE: posture, command and control, movement and maneuver, protection, and sustainment. But with the way the Air Force currently operates, that last element of sustainment presents a particularly large challenge.

“The way we do things today, we need to take food, fuel, water, and most importantly, equipment to complete a mission,” Kenney noted in his Spark Tank submission. “Many things are simply non-negotiable. Decision makers are faced with hard choices of what to take and what to cut.”

Put another way, “the No. 1 thing is space,” Connelly told Air Force Magazine. “So they get a very limited [amount] of space to take the most vital things, and that’s what they’re going to use for the mission. Other than that, it’s got to be shipped in.”

The biggest space-eaters, both Airmen noted, are often fuel and water, the resources needed to power any base and the personnel on it.

Kenney had been considering this problem for a while when he approached Connelly in March of 2021—Connelly, an innovation manager, was hosting a class that Kenney attended.

“He got a hold of me at the end of class and then he says, ‘Hey, Matt, I got this idea I want to run by you, let me know what you think,’” Connelly recalled. “And he starts talking to me about three-phase power and about HVAC efficiency, how one HVAC unit … uses as much power as a single American home does. It’s very power inefficient. And we’ve been using the same tried and true methods for decades upon decades, just diesel engines powering a whole bunch of things.”

Together, the two started stitching together ideas, all with the common goal of increasing efficiency and reducing the logistical footprint. The end result is a three-pronged system Connelly said could save millions and free up massive amounts of space for mission planners.

Second, there are the water harvesters, “essentially dehumidifiers, but … incredibly efficient by comparison to the kind of stuff that we can get at Home Depot,” said Connelly. Using solely the humidity in the air, one water harvester can generate nearly 30 gallons of water per day. With environmental sources of water like rivers or ponds, it can produce upwards of 300 gallons.

Finally, there’s an HVAC unit for heating and cooling workspaces that uses a third of the power of traditional units. In a three-day, 30-person test, Connelly and Kenney said, the small generator needed to power a simulated forward operating base only consumed 10 gallons of fuel, compared to the more than 150 that it would typically need.

“Having an innovation like this in our arsenal would significantly decrease our logistical footprint when operating in a bare base location,” Kenney said.

But it’s not just logistics and space that would be freed up—Project Arcwater is also aimed at the bottom line.

“One of the things Brent is very fond of saying is that we buy fuel, to fly fuel, to transport fuel, to burn fuel,” Connelly said. “And what he’s saying is that the actual price per gallon, when that diesel hits the generator at the operating site, is closer to $30 a gallon than it is to $4 a gallon because of all the work that went in to getting it to that location.”

Kenney and Connelly are hardly alone in exploring the potential benefits of new technology for essential utilities like power and water. Since they’ve begun work on the project, agencies like DARPA and MGMWERX have reached out to collaborate, something they’ve embraced. But they believe their particular system has an advantage.

“We’re kind of combining those efforts, with the key difference that this thing was built in the field, not in a boardroom or on a chalkboard,” Connelly said.

With so many agencies already pursuing the idea, Kenney and Connelly aren’t focused on securing funding in Spark Tank. Instead, they’re asking for the project to be assigned an office of primary responsibility. The thinking is simple—someone needs to lead the charge.

“If it’s an orphan, then whose responsibility is it? It’s the curse of the commons. If it’s everyone’s responsibility, then it’s no one’s responsibility,” Connelly said. “But if we point to someone and say, ‘you know what, we need to make this your new way of doing business,’… this will be a good thing. We’re replacing big chunky diesel generators and replacing them with solar fabric that you can breathe next to.”

Report: New Intelligence Offices Could Benefit US in ‘Techno-Economic Competition’

A new report suggests that the U.S. military’s “technological edge” could erode—the Defense Department no longer able to fulfill its commitments or to project power in the customary way—if the U.S. doesn’t become a better-informed player in the global “techno-economic competition.” To that end, a one-year-old think tank with its…