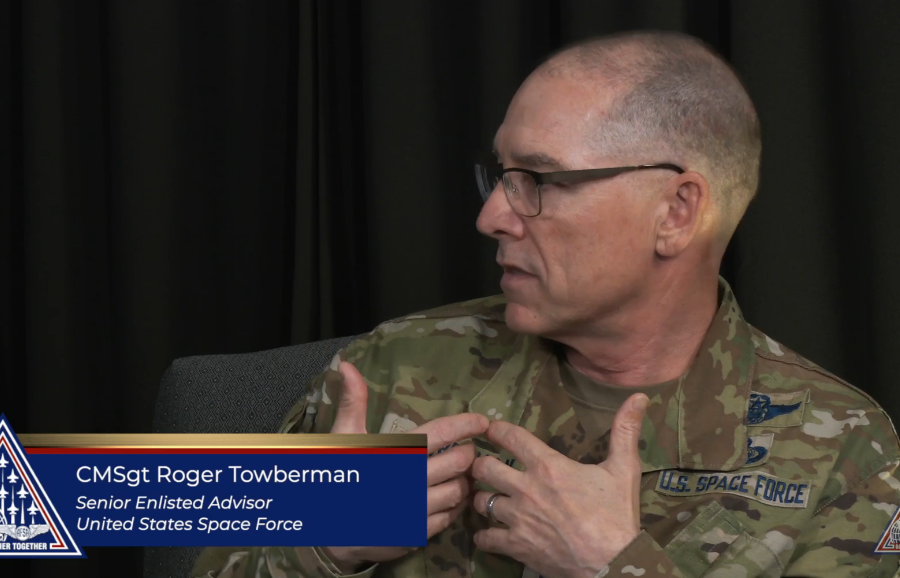 Space Force Waiting on Capitol Hill for its Ranks

The Space Force was getting ready to announce its enlisted ranks, with chevron designs in the works, until a former Sailor got in the way.

Space Force Senior Enlisted Adviser Chief Master Sgt. Roger A. Towberman said the new service wanted to announce the new enlisted ranks for the service, but a proposed amendment to the fiscal 2021 National Defense Authorization Act by former Sailor Rep. Dan Crenshaw (R-Texas), which calls on the Space Force to use U.S. Navy ranks, put that on hold.

“We’ve got to let that law, that legal system, play out and so until it plays out, there’s really no point moving forward,” Towberman said at the Air Force Sergeants Association’s virtual conference Aug. 26. “We’re ready to execute. I’m ready to be a master chief if that’s what the law says I’ll be. We’re ready to pivot and do something else if we’re asked to do something else.

“So, until that plays out, there just really isn’t any news. I know that’s frustrating to folks, we really would have preferred to have an answer by now,” he added.

For the foreseeable future, Space Force enlisted ranks will be “E-1 to E-9,” Towberman joked, adding that those who cross over to the new service from the Air Force will maintain their current rank title. The Space Force is still working through the 9,000 Airmen who in May applied for the 6,500 spots in the service.

“For those junior grades in particular, it means they’re still gonna be called Airman even though they’re in the Space Force, because we just don’t have any other options right now,” he said. “I would have preferred to have moved forward, but that is what it is.”

The Space Force does have chevron designs that it is “ready to release to the field” in focus groups and in a survey to current enlisted members, though “we’ve held back on that as well, waiting on clarification on what does this law mean? So, if this gets passed, does that mean we use Navy chevrons? I don’t know, and so there’s no point wasting people’s time looking at different chevron designs if we’re gonna wear Navy stripes.”

The service is “excited” that there’s interest on Capitol Hill about enlisted personnel, he added.

Towberman spoke extensively at the AFSA event, discussing issues like the future culture of the service and how it will handle military education. Foremost to the service, Towberman said, is building a Space Force that looks like America at large. Building a new military branch means there is an opportunity to create it without barriers that block minority Americans from joining and progressing. One questioner focused on the makeup of American astronauts, which historically have not included a representative number of minorities.

“Diversity makes the team better,” he said. “We don’t need to get people to want to do this. They want to do it. What we need is there needs to be no barriers. There are young girls, young African Americans, young Latinos all over America who are into space. Somehow, they walk away at some point because of barriers.”

The comments come as the Department of the Air Force is reviewing its promotion and military justice processes for racial biases. The Space Force is now looking to build its career progression, promotion, and retainment processes needed to “make sure the pathway is open,” he said.

It’s too early in the Space Force to outline what things like promotion rates, number of assignments, etc., will be. This creates some uncertainty for those looking to join the service, and Towberman said it “doesn’t offend me” if prospective members choose to go elsewhere. The Space Force’s goal is to be different, and “better for some people. The goal is to design a service that is specific unto itself, so that for some people they feel like they belong there.”

One area that is coming into focus is professional military education, Towberman said. The Space Force needs to develop its own people, so over the next “couple years” it will have its own PME process, including “minor changes” to leadership schools on Space Force bases today. The schools will be similar to Airman Leadership Schools, and will give the same credit that has “full reciprocity” with the Air Force system, but there will be some “space flavor.” The Space Force NCO Academy will remain at Peterson Air Force Base, Colo., with the current academy there transferring to the new service in October. The Senior NCO Academy will stay the same in the “near term” with personnel still going to Maxwell Air Force Base, Ala.

Basic Military Training will change in October, with blue name tapes issued to future Space Force members starting Oct. 7, though the trainees will go through basically the same training process with some adjustments.

“What we want is, from the beginning, for space personnel to know that they’re not in the Air Force. That’s important,” Towberman said. “It has to be different enough. Like, ‘My experience was different than yours,’ but a lot of things are going to be applicable. … We have the greatest NCO corps in history. We know that doesn’t happen by accident, the Air Force has done a lot of work to build that NCO cadre, so we’re going to use as much of it as we can. Fundamentally, we still have to stand on our own eventually, so we’ll do that.”