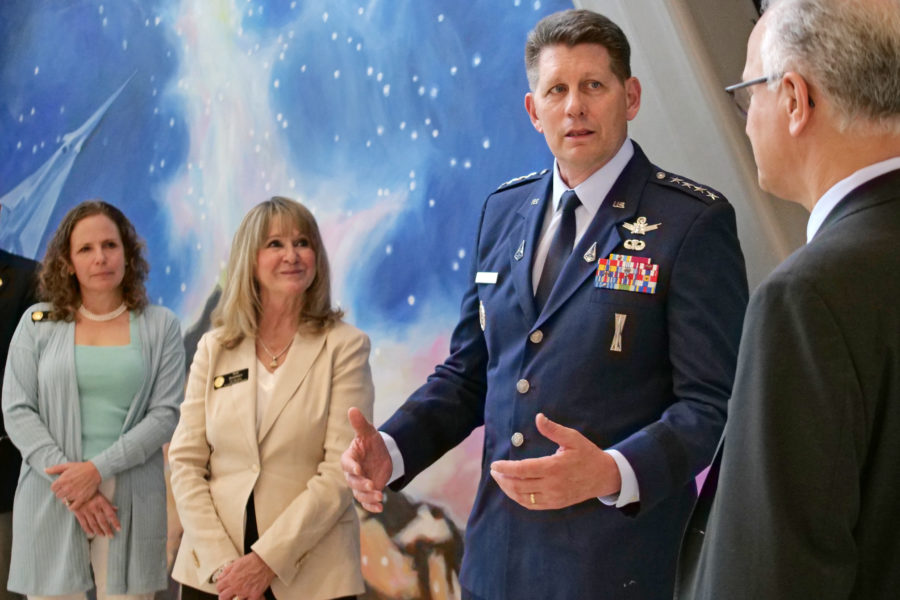 BOULDER, Colo.—The Space Force’s No. 2 officer inspected the aerospace research facilities of its newest university partner June 24 under a program designed to help it recruit personnel with more technical expertise.

Vice Chief of Space Operations Gen. David D. Thompson and Mark Kennedy, president of the University of Colorado system, agreed in principle that the university system will become part of the Space Force’s University Partnership Program. The system includes, in part, its flagship campus in the aerospace research and industry hub of Boulder, plus a campus in the national security space hub of Colorado Springs.

Kennedy said he’s “thrilled” that the University Partnership Program will involve both workforce development and research development as CU Boulder is one of the highest-funded public aerospace research institutions in the U.S.

When the full list is announced, each of the program’s cadre of aerospace research institutions will also be noteworthy in terms of already having “an incredibly strong officer development platform” in its Reserve Officer Training Corps detachment, Thompson said.

Thompson told reporters that about 10 universities have agreed to come onboard and he expects the program to kick off with formal agreements in place this fall.

“It is really a change in the way we do business,” Thompson said.

Starting over as a new service means the Space Force gets to ask itself, “What do we need to do differently that suits our needs, our challenges, in the 21st century workforce?” he said.

Faculty provided tours of their labs in the university’s Department of Aerospace Engineering Sciences, including its space domain awareness laboratory where students were actively tracking objects in orbit and its design-build-fly cubesat laboratory that lets students do all three by the time they graduate. Overviews of research included human-machine teaming for space surveillance.

Thompson said the Space Force has spent “a better part of the last year reaching out to universities, making sure they understand our goals and visions [and] … agreeing that we want to pursue it.”

He said the service realized that it needed to adapt its approach to education and training to meet its particular needs, which are “very, very focused and very, very high-tech … to be able to operate successfully in an incredibly complex physical and technical domain.”

“In many cases in the past, we haven’t required it,” Thompson said, referring to a focus on high-tech skills in the workforce. “We have counted on what universities have provided. We’ve hired engineering and consulting firms and what we call federally funded research and development corporations to provide that deep technical expertise.”

Workforce development for civilian personnel, in particular, has lagged behind.

“Probably the largest and heaviest lift for us is we’re going to be about 50 percent civilian workforce—government civilians” for whom job expectations and requirements “have not kept pace with what we do for military members,” Thompson said.

His former aide-de-camp helped to shape the idea for partnering with universities.

“My previous aide-de-camp was an African American, and—demonstrating the bold leaders we expect in the Space Force,” Thompson emphasized, seemingly for the benefit of the cadets present, “he came into my office one day, and he said, ‘Gen. Thompson, first of all, do you know the No. 1 producer of African-American engineers in the nation?’ And I said, ‘No.’

“He said, ‘Let me tell you about that school.’”

That advice led to North Carolina Agricultural and Technical State University becoming the first to agree to a partnership.