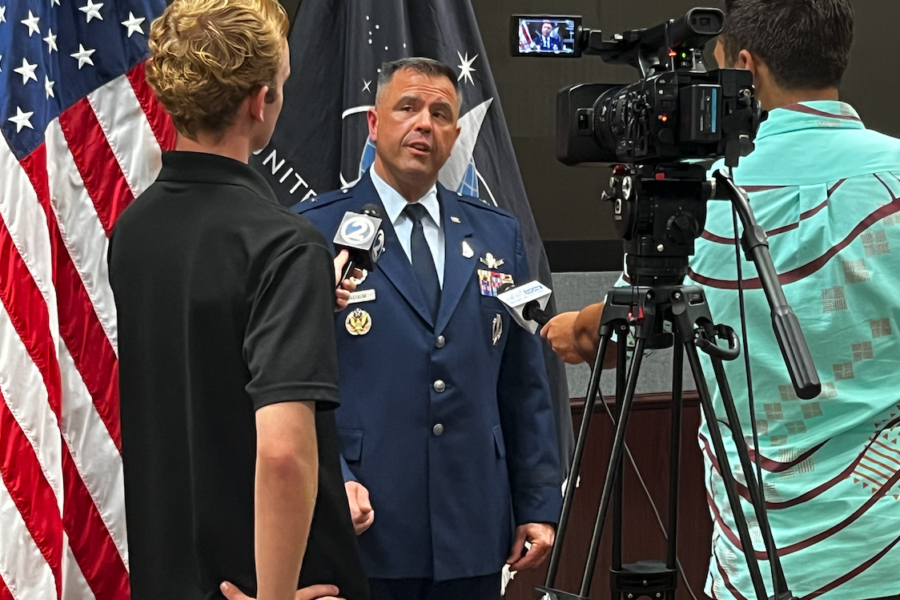 The Space Force and U.S. Indo-Pacific Command formalized a new chain of command for Guardians in the Pacific, activating a new service component command of the unified combatant command.

Establishing U.S. Space Forces Indo-Pacific gives the Space Force a seat “at the table” to plan for activities in the INDOPACOM area of responsibility, the service’s Vice Chief of Space Operations Gen. David D. Thompson told reporters the morning of the ceremony that created the new component-level command.

Now focused on mission analysis and how to best task the command’s existing Guardians, the new commander envisions command and control of space assets ultimately happening from INDOPACOM’s AOR.

Until the activation, Pacific Air Forces had responsibility for the space mission within the combatant command. Mastalir said the new command will continue to nurture its close ties to the air component but pledged at the ceremony to “double down” on incorporating space “across all components, all domains.”

In an interview with reporters the day before the ceremony, Mastalir said the ongoing mission analysis is to address whether the component has “the right Guardian, with the right skill set, in the right place, at the right time” while also ensuring “reach-back mechanisms” exist to coordinate with other organizations. Those include the likes of U.S. Space Command’s Joint Task Force-Space Operations and Joint Task Force-Space Defense, not to mention the Space Force’s Space Operations Command and Space Systems Command, along with commercial providers of space services.

The component’s Guardians are space operations enlisted members, officers, and civilians—Thompson placed the number at 21. Mastalir said they’re “really focused on integrating space into the operations plans, contingency plans—ensuring that other component commanders absolutely, without a doubt, maximize the combat effects available from the space capabilities this nation has.”

A priority of getting the right Guardians into the right roles involves ensuring that they’re “performing tasks that only Guardians can perform,” Mastalir said. Those include advising on satellite communications across the Pacific’s “tyranny of distance—it’s a real thing” and on fighting through “intentional interference” with communications and GPS.

In an AOR with “a somewhat irresponsible actor … launching missiles,” Mastalir said “being able to understand … what those profiles look like, projected impact points, making sure that U.S. service members are safe—that’s something that a Guardian can bring a lot of expertise on.”

He also wants space-oriented learning objectives built into Tier 1 exercises, describing support for exercises as a “huge growth area” for the new command. He foresees the possibility of intelligence and cyber Guardians joining the component’s space operators down the road.

While U.S. Space Command already had a Space Force component command, Thompson said the choice to stand up INDOPACOM’s first among the geographically organized combatant commands was no accident.

“Secretary Kendall has a little different way of saying it,” Thompson added, referring to Air Force Secretary Frank Kendall. “He just comes in and says, ‘China, China, China.’ And so we very deliberately chose INDOPACOM first because we want the nation, the Department of Defense, that combatant command, and anyone who might wish us harm in that region, to understand that’s our [priority].”

Thompson characterized the significance of space activities in INDOPACOM’s AOR:

Whereas generals may lead the other services’ components within the combatant commands, aside from Mastalir’s job at INDOPACOM—seen in part as making a statement about the department’s priorities—Thompson said the rest of the Space Force’s component commanders will be colonels.

“We’re not big enough,” Thompson said. “That kind of overhead is not something that we can afford.”

Speaking at the ceremony, Chief of Space Operations Gen. B. Chance Saltzman said the new component command represents “an important step as we normalize space integration into the joint force.”

“And given today’s multi-domain character of war,” Saltzman continued, “space must be deeply integrated with the rest of the joint team. This is never more true than in this AOR where we find ourselves competing against a thinking adversary who continues to field counterspace systems as well as their own exquisite space-based support systems for their increasingly capable terrestrial forces.”

Mastalir addressed “all the blue-threads in the audience,” referring to the Space Force members:

“As of today, you are the Guardians of INDOPACOM. You are outranked and outnumbered by every other component here—I don’t care. I expect you to be confident and bold” with “courage to explore the new and innovative ways we will need to integrate your expertise into this fight.”

Tobias Naegele contributed to this report.