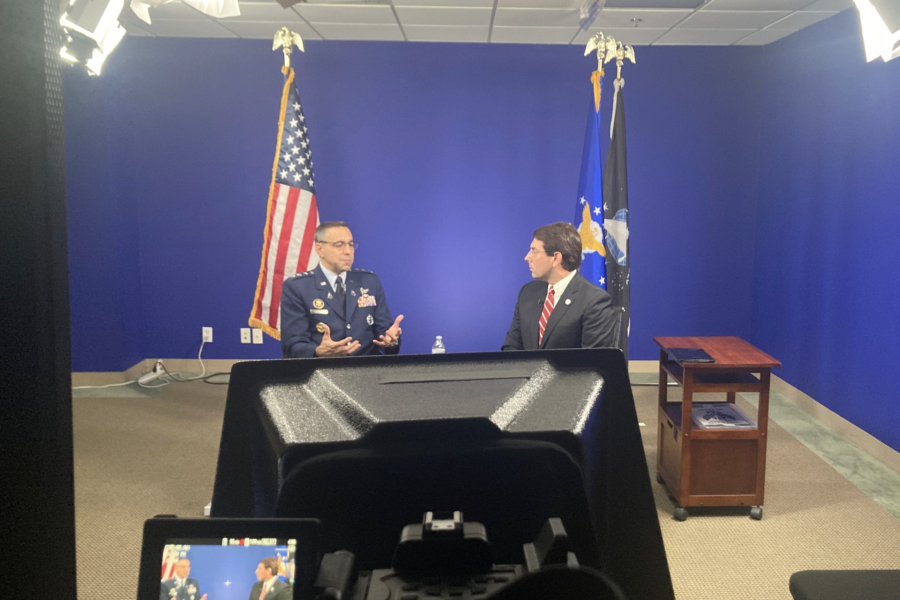 The Space Force’s much-increased 2023 budget request highlighted major investments in missile warning and tracking, but the service is hoping to add data transport and space-based intelligence, surveillance, and reconnaissance as major pieces to its 2024 request, the service’s top planner said June 2.

Such a move would bring USSF in line with Air Force Secretary Frank Kendall’s operational imperatives, which include a focus on air and ground moving target indication. The Air Force has decided to use E-7 Wedgetails to replace the aging E-3 Sentry fleet, covering the need for some moving target indication capabilities, but the plan to replace the E-8C for GMTI has been less clear.

“Our intent will be to pick up right where we left off in ’23. We’ll want to move forward and complete our pivot in missile warning, missile tracking, but then begin to move into other mission areas as well,” Liquori said.

The Space Warfighting Analysis Center, which provided the analysis that shaped the pivot to missile warning/tracking in the 2023 request, is working on a force structure analysis for space-based GMTI that will be complete “later this month,” Liquori added.

That analysis, as part of the operational imperatives, will inform how the 2024 Space Force budget is built, a process that has already begun and will continue for months—going through the Pentagon and the White House’s Office of Management and Budget before hopefully being unveiled in February 2023, followed by work with Congress “to explain the force design and the analysis and to answer questions and then move forward” with the 2024 National Defense Authorization Act and appropriations bill.

“The intent here is to try to make sure that we don’t have a gap,” Liquori said. The Air Force plans to retire most of its JSTARS fleet by the end of fiscal 2024, raising some concerns about a capability gap opening up before space-based ISR is ready.

ISR is a particular area of focus for the Space Force. Chief of Space Operations Gen. John W. “Jay” Raymond has touted the service’s future in providing tactical ISR, and Undersecretary of the Air Force Gina Ortiz Jones has noted that “there are many things that just make a lot of sense to do from space.”

Naturally, then, the Space Force turned to ISR as the first mission area to address as the newly-appointed integrator for all joint space requirements, Liquori said.

“We’ve got a team that has started working with all the other services, the combatant commands, as well as the Joint Staff and the Intelligence Community, on really getting a handle around, what are the Department of Defense’s requirements for space-based intelligence, surveillance, and reconnaissance?” Liquori said. “And so that team has been going since the start of the new year.”

The first fruit of that work is an ISR “needs” memo, which lays out “all of the DOD’s space-based ISR requirements,” Liquori said. Right now, the memo is “working through the Joint Staff coordination mechanisms” and will eventually go to the Joint Requirements Oversight Council.

Once it is approved there, the next step will be a gap analysis to see what needs aren’t being fully met. But Liquori made clear that he doesn’t expect the Space Force to fill every role needed, or to take over responsibilities already handled by other agencies.

“There is a large portion … that the national Intelligence Community already meets and will be able to continue to meet. We don’t want to replace that,” Liquori said. “But we do believe … that while the national community will be able to fill a large portion of that, there will be a subset that’s left over. And that would be Title 10-type capabilities that it makes sense for us to go do and that’s what Gen. Raymond talks about when he’s talking about tactical intelligence, surveillance, and reconnaissance.”

Key to that tactical ISR, as it has been with so many of the Space Force’s efforts, will be resiliency, Liquori said. And to that end, the service will look to use commercial capabilities in addition to fielding its own assets.

“Hybrid approaches certainly give us more flexibility. Actually, you get some resilience from that as well,” Liquori said. “And so I would anticipate it will be a combination of things, both government owned and operated, commercial, there is a plethora, there are a large amount of commercial companies that are getting into this space, are already in this space, and it would be short sighted of us not to leverage what’s out there.”