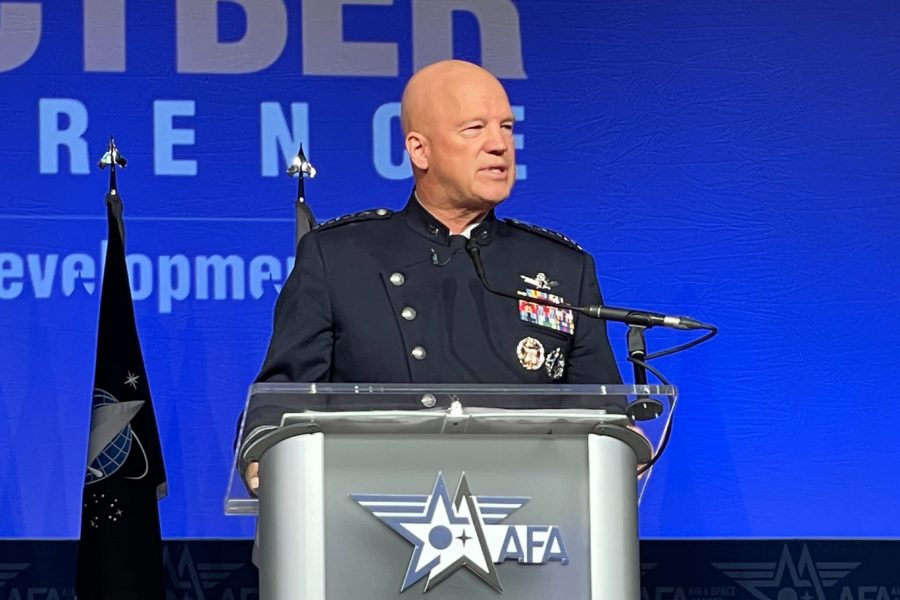 Wearing the black and gray of the new Space Force uniform, his voice cracking periodically with the emotion of his last major address as CSO before the AFA audience, Raymond cited the unique “opportunity to start with a relatively clean sheet of paper” and the need to mesh with the other services’ songs in describing the collaboration that created the song, whose lyrics and melody were written by a former Airman with the musical arrangement by a member of the Coast Guard Band. The words:

Guardians beyond the blue

There’s no limit to our sky

We’re the Space Force from on high

In a video screened during Raymond’s keynote speech, James Teachenor, a former member of the U.S. Air Force Band, said he gathered ideas for the lyrics by reading white papers and speaking with Raymond and Chief Master Sergeant of the Space Force James Teachenor.

Composing the words “was quite a long work in progress for a while because I wanted to make sure that everything that was in the song would adequately represent all the capabilities that our space Force is involved with and make sure I didn’t mess up on the mission or the vision of what the Space Force does.”

With the words complete, the musical score came next. The Coast Guard’s Sean Nelson “worked a masterful arrangement to this song,” Raymond said in the video, “and it all comes together into something that I hope Guardians will really love.”