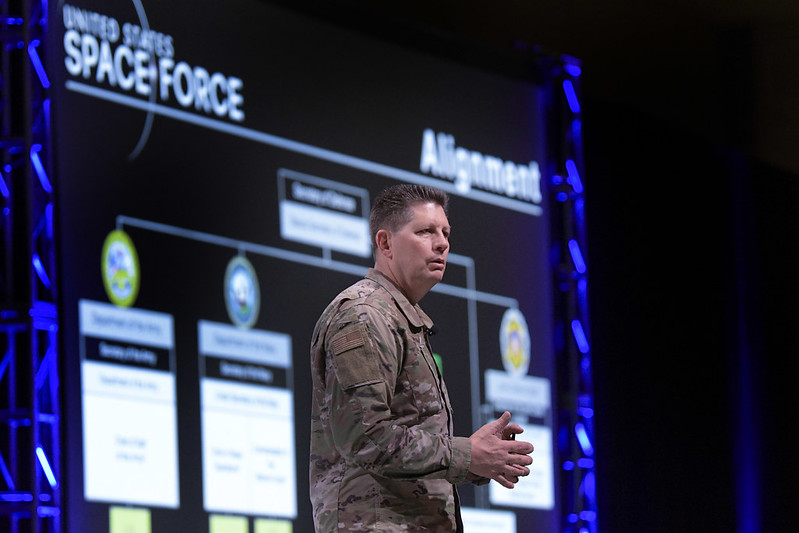 ORLANDO, Fla.—The Department of the Air Force is finished internally coordinating which USAF units will move into the Space Force and is awaiting Secretary Barbara Barrett’s approval, a top space official said Feb. 27.

The first group of people who will be asked to re-commission and re-enlist into the Space Force are those with the specialty codes 13S, or space operators, and 1C6, the enlisted equivalent. Those personnel will likely come in by the end of September, Space Force Vice Commander Lt. Gen. David Thompson said.

The second group will be the intelligence officers, engineers, acquisition experts, and other related career fields who are crucial to space operations. They may begin joining the Space Force sometime in fiscal 2021.

“Anticipate on the order of a year to get those first two blocks,” Thompson said. “The reason that second one is going to take longer … is we want to be sure that … we get that second piece right for the people involved.”

Thompson declined to say when this year those first Airmen will begin the process of cross-commissioning into the new service. Other details, like if enlisted Airmen will have to extend their service agreement or finish out only the years they already signed up for, are still under consideration.

The Department of Defense continues to mull how service members from the Army and Navy will cross over into the Space Force as well. While Congress blocked the Air Force from creating new billets to grow the Space Force, Thompson said DOD made cuts across the department to allow for more billets in the fledgling service, without technically adding any more positions that didn’t already exist.

“There’s been allocated reductions from the Air Force, from the Army, from the Navy and [the Office of the Secretary of Defense], so that growth we’ve identified that we need for space intelligence, for doctrine centers, to handle personnel, that do warfighting, all of … those billets for what we need have been paid for by [gradually shrinking] personnel requirements in other areas,” he said.

What’s in a name?

By the time they start shifting to the Space Force, Airmen may not be called Airmen anymore.

Thompson said officials are getting close to a decision on what Space Force members will be named. The effort to crowdsource a title has garnered more than 500 responses and is now closed. Those responses are suggestions, not a vote.

He noted that part of the conversation about what to call the operators deals with overhauling part of the rank structure as well. The first four enlisted ranks, like Airman 1st Class, will need to drop the word “Airman.”

These decisions may be just the first step toward building a unique culture for the force, and could change down the road. Personnel could be called something else in several decades if it suits them better, he suggested.

To better educate Airmen about what to expect in the coming months, Space Force officials are going on the road to hold briefings at bases starting next week. Space-focused bases like Peterson Air Force Base, Colo., and Vandenberg Air Force Base, Calif., will be first, followed by other USAF installations with a large space presence, like Kirtland Air Force Base, N.M.

“They’re going to have a tremendous number of questions that impact them personally, and so we needed to wait until we had enough of that work developed, enough answers to the questions they’re going to ask before we did it,” Thompson said.

As part of forthcoming reports to Congress, military officials are also thinking through what a new space intelligence center should look like. The Air Force already has the National Air and Space Intelligence Center at Wright-Patterson Air Force Base, Ohio, but some think the emergence of new threats to space assets warrants a separate approach.

A standalone space intelligence research hub could boost the military’s understanding of an adversary’s tactics, techniques, doctrine, and capabilities to match that of the older services. That’s part of a list of field commands, like Space Force Systems Command, and other organizations that will be explored in another forthcoming report.

“How do you defeat adversary systems? None of that function and structure is really resident in the space intelligence enterprise today. There’s a pretty good foundational set of them, there’s a good engineering assessment of what they are, what their capabilities are,” Thompson said. “But what are the tactics? If you need to defeat those tactics, how can you do that? None of that exists. We also don’t have nearly enough intelligence support in our operational space units.”

Heading to the Hill

The Space Force is within days of delivering a legislative proposal to Capitol Hill to shape the fiscal 2021 defense policy bill, Thompson said. It will include a “handful of pretty large requests,” he suggested.

That document will lay out details of what transfer authorities the Department of the Air Force might need to bring people into the space service, special authorities it could use to manage those employees, and legal changes required to build a better space acquisition enterprise. It also aims to clean up laws that are already on the books to make sure they apply to the Space Force.

“Those proposals are going to be our, put it on the table and say, ‘if you really want us to do this, here are the things we think we need,’” Thompson said. “It’ll be an interesting discussion, just to see how far and how willing folks are to take some of those measures to do what we believe they’ve asked us to do: create a lean and agile and responsive 21st-century force.”