Skip to content
Air Force Maj. Gen. James D. Peccia III, deputy assistant secretary for budget in the Office of the Assistant Secretary of the Air Force for Financial Management and Comptroller, presented an overview of the Department of the Air Force’s fiscal 2022 budget request in a press briefing May 28 at the Pentagon. Screenshot photo.
Expand Photo 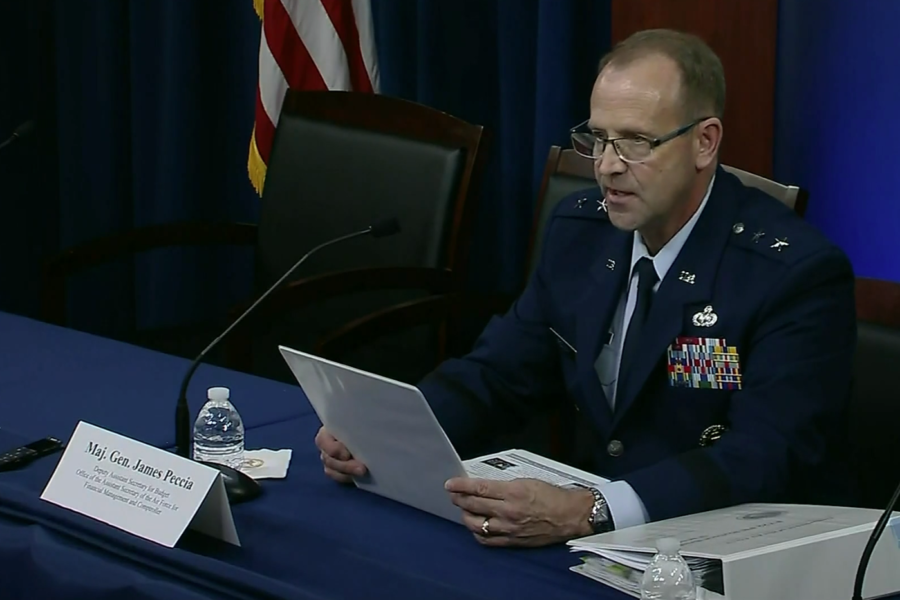 The Space Force is asking for $17.4 billion in its 2022 budget request—more than 10 percent of the Department of the Air Force’s $173.7 billion “blue” budget and a $2 billion increase from 2021. It would grow the service to 8,400 Guardians, pay to transfer satellites from the Army and Navy to the new service, and fund more than $800 million in new classified programs.

That’s less than half of the $39 billion in “non-blue” funding that passes through the Department of the Air Force’s budget but is not controlled by the department.

A “large chunk” of the extra $2 billion is for the operation and maintenance of USSF facilities that are still being paid for under the Air Force’s budget in fiscal 2021, said Air Force Maj. Gen. James D. Peccia III, the department’s deputy assistant secretary for budget, during a May 28 budget roll out at the Pentagon.

He estimated that the transfer of satellites and space missions, such as the Army’s transfer of the Defense Wideband Enterprise SATCOM System and the Navy’s transfer of the Mobile User Objective System, amount to about half of the increase. He referred to those as a “a couple of examples from a long list” of items transferring.

Peccia characterized the 2022 request as having “a lot of plus-ups in the unclassified programs, but there are well over $800 million in classified programs that went to the Space Force this year for new programs.”

In an earlier overview of the DOD’s overall request, Navy Vice Adm. Ronald A. Boxall, director of force structure, resources, and assessments for the Joint Staff, said the overall DOD budget includes $20.6 billion “to strengthen U.S. capability in space—to deter conflict and prevail in a global, all-domain fight.” At the same time, “the whole department is kind of shifting its focus onto China,” Boxall said.

The defense-wide budget request, meanwhile, proposes more than a threefold increase in the Space Development Agency’s research, development, test, and evaluation budget, from $267.1 million in fiscal 2021 to $808.8 million in the fiscal 2022 request. The agency wants to create a constellation of low-cost, open-architecture, data-relay and missile-tracking satellites. The agency’s first procurement request is also in the 2022 request, for $74.1, with $53.9 million in operations and maintenance bringing the SDA’s total request to $936.8 million. Established in 2019, the SDA is part of the Office of the Secretary of Defense but is supposed to become part of the Space Force before fiscal 2023.