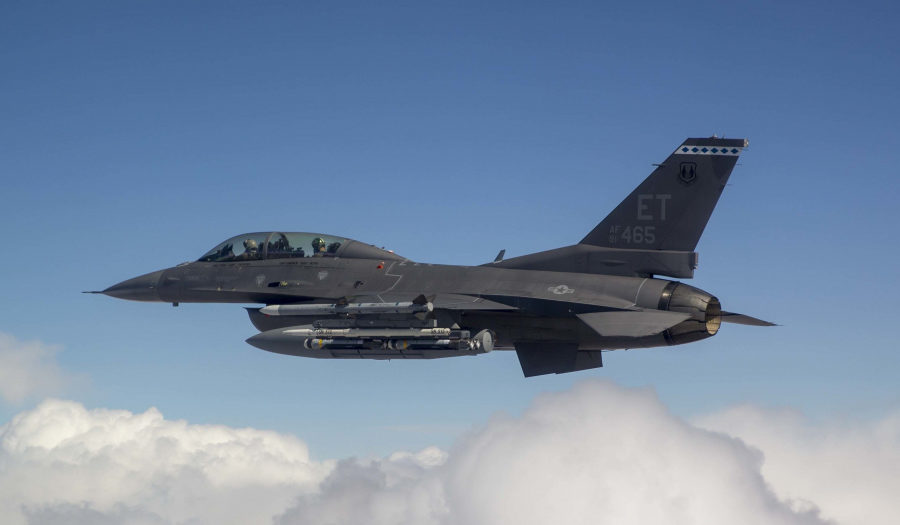 Six GBU-39 Small Diameter Bombs dropped from two F-16s set up their own network, changed their targets in flight and synchronized their strikes in a multifaceted final flight test of the current phase of the Golden Horde collaborative weapon technology, the Air Force Research Laboratory said.

Two F-16s from the 96th Test Wing at Eglin Air Force Base, Florida, flying over White Sands Missile Range, New Mexico, dropped a total of six Boeing-made Small Diameter Bombs—four from one of the fighters and two from the other—in the May 25 test. The munitions established communications with each other and a ground station using the L3Harris Banshee 2 radio network and then reacted to a new high-priority target.

The In-Flight Target Update demonstrated “the ability of Golden Horde weapons to interface with the larger joint all-domain command and control network,” AFRL said. This capability is key to developing future “networked, collaborative, and autonomous,” or NCA weapons, according to a press release.

The new mission called for two of the weapons to make a synchronized time-on-target attack on a single location, while two other munitions made synchronized attacks on two targets, something that had previously been tested.

The synchronized time on target algorithm, supplied by Georgia Tech Research Institute, “was able to flexibly support the new target requirement without any software changes,” the AFRL said.

AFRL Commander Maj. Gen. Heather L. Pringle said the test is a technological leap not unlike the advent of laser-guided bombs in the 1960s.

“These technologies are completely changing the way we think about weapon capabilities,” she said in a press release.

Golden Horde is one of the Air Force’s Vanguard programs—technology demonstrations that will pave the way for new applications of weapons technology and manned/unmanned teaming.