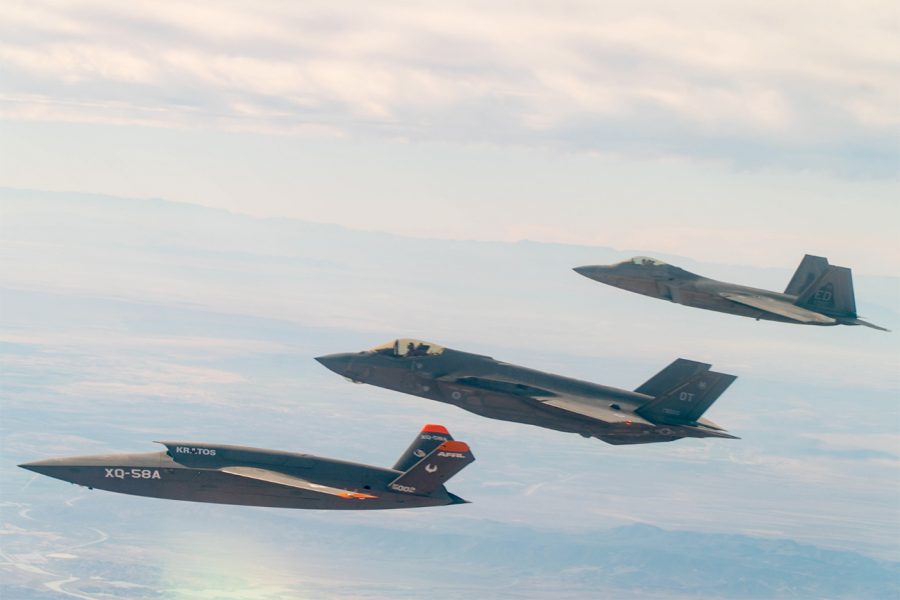 Skyborg Drone Translates Between F-35 and F-22 in Test

The Air Force successfully got an F-22, F-35B, and XQ-58A Valkyrie “attritable” drone talking to each other in a Dec. 9 test, demonstrating a connectivity between stealth platforms the service has sought for years. It was also the fifth flight of the Valkyrie—flying in formation with the F-22 and F-35.

The Kratos-made Valkyrie, one of the “Skyborg” class of drones, carried a “gatewayONE” translator system, allowing an Air Force F-22 and a Marine Corps F-35B to communicate using their otherwise incompatible datalinks: the Intra-Flight Data Link, or IFDL, on the F-22, and the Multifunctional Advanced Data Link, or MADL, on the F-35. The datalinks let F-22s and F-35s communicate with other jets like themselves without being detected or overheard, but weren’t designed to be interoperable, separated as they were by 20 years of technology advance.

While the test began using the Valkyrie’s onboard translator payload, the communications payload lost connectivity shortly after the aircraft’s rocket-powered takeoff, the Air Force said. It isn’t yet known what happened or why the payload failed. The remainder of the test was run using a ground-based version of the system.

All told, only nine of 18 test objectives were met. The jets shared “actionable operational data” collected by the F-35B over the U.S. Army Yuma Proving Ground, Ariz., the service said.

The Air Force promoted the test as “another step toward achieving a military Internet of Things,” according to a press release. The gatewayOne translated between the two fighters’ formats and pushed data into their cockpits’ displays.

Preston Dunlap, the Department of the Air Force chief architect, told reporters on Dec. 16 the test was not meant to signal that the Valkyrie will necessarily become a flying gateway for communication between stealth aircraft inside contested enemy airspace. Rather, the translator payload was one of a number of mission-specific, modular payloads the drone can carry. However, serving as a translator between the two fifth-generation fighters and other stealth platforms could be one of those missions, as the Valkyrie is supposed to be a low-observable platform as well.

“Don’t confuse the C-3PO and R2D2,” Dunlap said, referring to the Star Wars robots that can translate many languages and serve as a multi-function tool, respectively.

“They work sympatico but they don’t have to be the same thing,” he said. In the Dec. 9 test, there was an “opportunity” to test the translator on an aerial platform that was essentially generic. “We’ll have several prototype opportunities throughout our Skyborg competition,” he said, noting the next such test will likely occur in May or later in the summer of 2021. Modularity of platforms is one of the hallmarks of the Skyborg program, he added.

The test also demonstrated “the beginning of a family of vehicles to be able to operate with the fifth-generation platforms,” Dunlap noted.

In a press statement, Dunlap said the two-way secure communications between the fighters was once thought impossible, but the test is a step toward “making the impossible possible … .In just 12 months, the team has opened the door to a world where we can put the power of an operations center into the cockpit at the tactical edge.”

The test is indicative of “the stuff ABMS is all about,” as it demonstrated cross-service communication and target handoff, said Lt. Col. Kate Stowe, gatewayONE program manager for Air Force Lifecycle Management Center, in a release, referring to the service’s Advanced Battle Management System program. The “win” of the test was “seeing gatewayONE establish a secure, two-way translational data path across multiple platforms and multiple domains.”

The Air Force also said it ran a test this week where a KC-46 tanker served as a communications node “using commercial internet routing standards over the Tactical Targeting Network Technology Waveform,” passing F-35B full-motion video to a ground controller. In both the KC-46 and Valkyrie tests, the idea was to take advantage of a platform “that’s going to be in the area already, anyway,” Dunlap observed.

“The big win here, we heard from the pilots themselves, [was] being able to push information into their cockpits … in a way that was operationally relevant and useful to them,” Dunlap told reporters. “It’s not all the data they would want, but it has opened a door. … We’ve got to keep pushing the technology that moves the data back and forth amongst the different systems.”

The tests last week also demonstrated the importance of using artificial intelligence to fly aircraft and conduct tasks like the communications translation, Dunlap noted. While “not everything worked, that’s okay, the team has learned and the team has addressed those things. [This is a] huge operational stepping stone here, [with] many chapters yet to go.”

Dunlap cautioned that the Air Force has not decided to use a gateway/translator platform as the ultimate solution for getting the F-22 and F-35 to be able to talk to one another. “Real estate” on a combat aircraft is precious and a software solution may yet be found, he asserted.

The Skyborg/F-22/F-35 test was planned to be done in April, but was delayed for reasons not explained by the Air Force.

The test was carried out by the Air Force Research laboratory, in conjunction with the 46th Test Squadron at Eglin Air Force Base, Fla.

Editor’s Note: This story was updated at 1:16 p.m. on Dec. 18 to correct the name of the squadron at Eglin Air Force Base, Fla., that carried out the test. It was the 46th Test Squadron.