Skip to content
Gen. Charles Q. Brown Jr., the commander of Pacific Air Forces, responds to a question, on May 7, 2020 on Capitol Hill during a Senate Armed Services Committee confirmation hearing to consider his nomination to be the next Air Force Chief of Staff. C-SPAN video capture via USAF.
Expand Photo 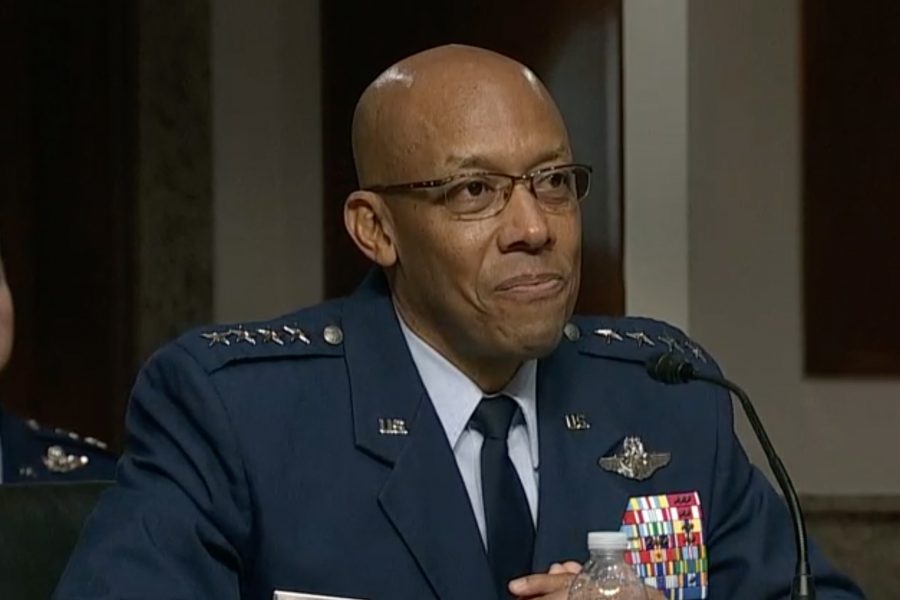 Brown, the decorated four-star general in charge of Pacific Air Forces, will begin his four-year term as Air Force Chief of Staff once he is sworn in on Aug. 6. His confirmation comes as the military responds to nationwide protests over police brutality and systemic racism, spurred by George Floyd’s death in Minnesota last month.

“There is no one I know who is better prepared to be Chief of Staff, no one who has the experience and the temperament to lead the Air Force,” said Gen. David Goldfein, the service’s current top uniformed official. “The Air Force and our nation will be in good hands under his leadership.”

As the 22nd Air Force Chief of Staff, Brown will inherit a 2020 budget of a $168 billion and about 685,000 employees. He has pledged to carry out the service’s sweeping modernization plan, continue fighting insurgents in the Middle East and Africa and posturing against Russia and China—all while adjusting to operations amidst the COVID-19 pandemic. Earlier this year, he opened the door to a review of the Air Force’s roles and missions, and said he would pursue new approaches to aircraft and personnel readiness.

Brown, who was nominated for the top job in March, has racked up more than 2,900 flight hours in more than a dozen aircraft, held leadership positions at U.S. Central Command, U.S. Indo-Pacific Command, and U.S. Air Forces in Europe-Air Forces Africa. He’s also earned nearly 20 military decorations since the 1980s.

Growing up in a military family, his father served in the Vietnam War and retired as an Army colonel after 30 years of service.

“I see an emerging challenge where our strategic aspirations and our resources available may be on divergent paths driving future tough choices,” Brown wrote to the Senate Armed Services Committee. “As we review strategic objectives and priorities in the post-COVID-19 period, and continue the journey we started to build the Air Force we need to align with the NDS, we have many constraints and restraints that could hamper our ability to achieve our objectives as originally envisioned.”

The worst outcome, he added, would be to shrink defense funding without also revamping the military’s strategy or priorities. He supports steady budget growth of 3 to 5 percent each year in order to ensure the U.S. can counter another advanced military.

Brown’s promotion to become the first African American Air Force Chief of Staff, and a rare black member of the Joint Chiefs of Staff, carries particular significance at the present time. He plans to build on diversity initiatives already underway, said Pacific Air Forces spokeswoman Col. Megan Schafer on June 3. Even now, the service is launching a review of its disciplinary court-martial practices, which show that black Airmen are disproportionately punished in comparison to white peers.

As of Jan. 1, 15 percent of Active-duty Airmen and about 13 percent of civilian employees were black, according to the Air Force Personnel Center.

“I’m thinking about how my nomination provides some hope but also comes with a heavy burden,” Brown said in a June 5 video release in which he addressed the issues of race and justice in the wake of Floyd’s death and the public response that followed. “I can’t fix centuries of racism in our country, nor can I fix decades of the discrimination that may have impacted members of our Air Force. … I’m thinking about how I can make improvements personally, professionally, and institutionally. … I just want the wisdom and knowledge to lead during difficult times like these.”

“General Brown’s experience as commander of Pacific Air Forces and the air component commander of the Indo-Pacific Command will be an asset as we turn our focus even more to this priority theater,” Inhofe said. “Not only is General Brown accomplished in his military career, but he is an inspiring leader—brave, authentic, and unifying. I congratulate him on his historic promotion, and look forward to seeing his continued leadership in action.”