Securing Space Now Is a Priority 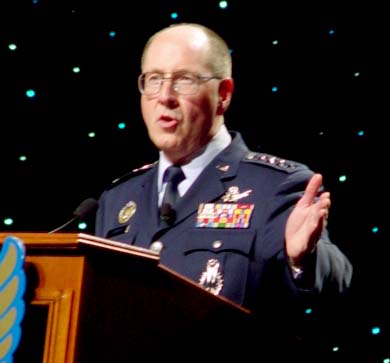 Air Force’s top space airman told the audience at AFA’s Air & Space Conference Tuesday that many of the concerns he had a year ago when he first arrived at Air Force Space Command are still very much on his mind, namely the stewardship of the nation’s land based nuclear deterrent, the protection of space assets from attack, and the need to increase space situational awareness. Gen. Robert Kehler said that there are more than 450 active spacecraft in orbit today, but there are still only a handful of nations that build satellites. “These are space-faring nations,” he said, while the rest have a credit card and can purchase space capability, making them “space capable.” Included in that category are terror networks, organized crime, and non-state actors. He said, “Space shapes the way America fights.” These entities can pose a threat in many ways, not just through use of kinetic anti-satellite weapons as was recently demonstrated by China. Anything that threatens the connectivity of satellite communications, intelligence, surveillance, and reconnaissance, and launch capabilities can threaten our space capability and make the US military less precise and slower in its ability to carry out effects on a global level. He said AFSPC must increase space situational awareness as a means to protect space assets, but he is increasingly concerned about cyber attacks and infiltration than about kinetic threats to space assets. Kehler said, “Space won’t become a contested domain; space is a contested domain.”