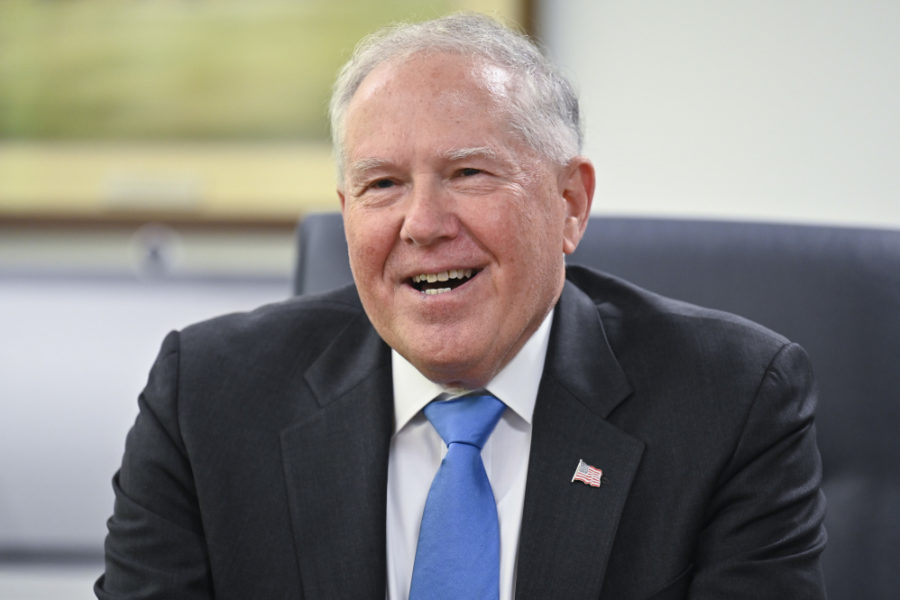 When Frank Kendall got a call from the White House asking if he could return to the Pentagon to lead the Department of the Air Force, he didn’t need long to think it over.

Kendall, who left public service in 2016 after leading Defense Department acquisition for four years, knew becoming the department’s top civilian was a chance to help address a growing national security problem about which he’d been sounding the alarm for more than a decade.

“The short answer is, I thought I could make a contribution to our national security,” Kendall told Air Force Magazine in an exclusive interview, his first since starting as Air Force Secretary. “I’ve been obsessed, or, if you will, very concerned maybe would be a better way to say it, with Chinese military modernization since 2010. And I think we have made some progress in addressing that problem. But, there’s a lot more that can be done.”

Kendall has spent almost 50 years working in military acquisition. A West Point graduate and former soldier, Kendall oversaw weapons buying in the Pentagon in the Obama administration. He said he came of age in the Cold War, a time when the U.S. was toe-to-toe with a great power, and that history, in some ways, is repeating itself now—and the military needs to adjust.

“I spent the first 20 years of my career in the Cold War working on some of the types of issues that we’re actually confronted with now: a peer competitor who is acting very aggressively to try to defeat us, and responding to that,” Kendall said. “One of the things that we did then, routinely and in great depth, was operational analysis—modeling and analysis to support requirements decisions. And I noticed when I came back in 2010 … that we weren’t doing that. That capability had atrophied. So, one of the things I hope to do is recreate some of that or expand on the capabilities that we have now.”

Kendall takes over an Air Force in flux, with a budget proposal that aims to reshape the service’s fleet lacking momentum on Capitol Hill and in a Pentagon beginning to draft its next National Security Strategy.

When Kendall left DOD acquisition, programs such as the B-21 and the Air Force’s Next Generation Air Dominance system were nascent and the F-35 faced an uncertain future. With new initiatives taking root, such as the service’s Advanced Battle Management System and the DOD’s overarching joint all-domain command and control concept, Kendall said he wants the Air Force to focus on emerging tech to compete.

“The obvious one that people talk a lot about is artificial intelligence and autonomous capabilities,” he said. “But there are others. There’s some sensing advantages that are coming along—there are opportunities there. Things like cognitive radar and cognitive [electronic warfare]. There are things that allow us to take some commercial technologies and communicate much more effectively and process data much more effectively, that allow us to make better decisions—various parts of an engagement scenario, if you will. And I think that we can mature that technology very quickly and get it applied to military problems.”

‘Not outrageous amounts of risk’

On specific platforms, Kendall is coy. On the day of the interview, he rushed from briefing to briefing with meetings overlapping each other in the Pentagon’s E ring of offices belonging to senior officials, taking a brief respite to talk to a journalist. The meeting prior was on the state of the B-21 Raider program.

“I actually walked in here from a brief on it, but that really doesn’t mean I can tell you anything about it,” he joked, before adding the Air Force’s position that it is performing “reasonably well. What I’ve seen suggests that that’s the case, so I’m encouraged by that. But again, we still have a long way to go.”

Throughout his career, including as the DOD’s lead on acquisition, Kendall said he looked at “literally hundreds if not more, a thousand maybe, programs.” His view is to structure programs “to get to that objective of meaningful military capability as quickly as possible and as efficiently as possible,” though the department’s track record in recent years is spotty at best—the F-35 and KC-46 stand out as examples.

“Cost and schedule overruns disrupt everybody … they cause lots of problems, and I try to avoid those, but do so in an approach that takes some risk, but not outrageous amounts of risk,” Kendall said.

“And what I’ve seen in part, I think in the last few years, is situations where people are going very, very quickly, but not necessarily in the right direction and not necessarily very efficiently. If you’re running fast in the wrong direction, you’re not making progress. And if you’re running as if you’re in a sprint when you’re actually in a marathon, you’re not going to do very well either. So, getting what we do right is first, and then doing it in the most efficient way is second, and in this position, I’m going to be focused on both.”

Kendall is quick to say, however, that his job isn’t just acquisition. He’s the Secretary, and he’s working on initiatives in other areas, such as personnel and retention. Following in-depth disparity reviews focusing on the problems minority Airmen face, Kendall said wants to ensure that “every Airman and Guardian is treated with dignity and respect and [that] we have a culture in which that is the norm and anything else is not accepted.” Barriers to service that some Airmen face are “largely a leadership problem to me, and we need to address it at every level, and we need to address it constantly.”

The Department of the Air Force needs to be able to “tap into all the human capital potential that’s out there, wherever it may come from.” An engineer by trade, Kendall said his view is that expertise needs a bigger role in service. “One thing that I think we need to do is make sure we have more engineers. We need to have people who are technically astute. We’re in a technological competition, in part, and developing technologies and then applying them more effectively than our potential adversaries is key to success. And what I described is engineering.”

‘Back in that game’

While the fiscal 2022 budget process is playing out on Capitol Hill, the Air Force is in the middle of preparing its fiscal 2023 budget. While much of that work took place before Kendall came in, he said he took the role “when I could be most influential—I think it’s fair to say that I may have just made it” and is making changes.

“It’s been a pretty hectic first 10 days,” he said. “Now, I’ve had great support from the staff. That’s been very encouraging, and we’re working our way through that. So, it’s possible that I’ll make some different recommendations than the Air Force did or would have made before I came.”

On the date of the interview, Aug. 6, Kendall was wrapping up his 10th day in office. He said he was surprised how fast he could adjust back to the “Pentagon pace of doing business—to 12- and 14-hour days and not getting much sleep. And going from one subject to the other, and the intensity of what we’re trying to do here, coupled with its importance.”

“I actually like working in the Pentagon. There aren’t many people that would say that out loud,” he said. “But, as in the show ‘Hamilton,’ this is the room where it happens. In fact, this is the building where it happens. This is where we decide. … This is where we’re going to do the things and make the decisions that are going to keep us safe and free—or not. And it’s an honor, it’s an awesome amount of responsibility I have, and it’s very humbling to be back in that game after a four-year hiatus. But it’s also incredibly stimulating and rewarding and fulfilling. I feel like when I walked in the building, … there I was back in the game, just like that.”